Does Michele Bachmann ‘Walk the Talk?’ 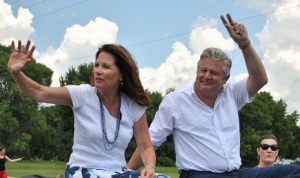 It’s common these days to hear media talking heads refer to Michele Bachmann as the “Tea Party favorite” in the upcoming 2012 GOP primary race. Unlike Governor Palin who has always stated that the Tea Party doesn’t need one specific leader, Bachmann has tried to cast herself into such a role. She created a “Tea Party Caucus” in congress and gave the “Tea Party response” following Obama’s State of the Union Address last January.

The Tea Party is comprised mainly of independent-minded small government activists who are sick and tired of the way Washington is operating. These are people who are fed up with DC insiders cutting deals with officials at the expense of this country’s future. A bloated, centralized system of government with too many payouts has spawned the biggest grassroots movement in recent history. A person who professes to speak for such a group of patriots at the highest level had better “walk the talk.”

While Bachmann may talk a good game, her actions are leaving many with questions that she has yet to adequately answer. Steve Bannon discussed one of these questions during a recent interview with PV Radio that Ian posted on Friday, concerning her family receiving large sums in Medicaid payments for their clinics.

“And I think quite frankly, she’s got to learn to answer questions. Like Chris Wallace asked a very straightforward question, she had every opportunity to explain this. And she gave quite frankly, an unacceptable answer. The answer was very misleading. And that’s just not going to wash, particularly if you want to hold the banner of the Tea Party, you’ve got to almost be a purist. That means, if you believe in limited government, then you’ve really got to believe in limited government. You can’t talk about limited government and take the benefits from the large state.“

Despite being an unlicensed “therapist” practicing a controversial form of counseling, Marcus Bachmann received more than $137,000 in Medicaid payments for his clinics in Minnesota. According to Michael Isikoff:

The amount is a much higher than the previously reported sum of $24,000 that she answered for during that interview with Chris Wallace. Isikoff writes:

The previously unreported payments are on top of the $24,000 in federal and state funds that Bachmann & Associates, the clinic founded by Marcus Bachmann, a clinical therapist, received in recent years under a state grant to train its employees, state records show. The figures were provided to NBC News in response to a Freedom of Information request.

The $161,000 in payments from the Minnesota Department of Human Services to her husband’s clinic appear to contradict some of Michelle Bachmann’s public accounts this week when she was first asked about the extent to which her family has benefited from government aid. Contacted this afternoon, Alice Stewart, a spokeswoman for Bachmann, said the congresswoman was doing campaign events and was not immediately available for comment.

Questions about the Bachmann family’s receipt of government funds arose this week after a Los Angeles Times story reported that a family farm in which Michelle Bachmann is a partner had received nearly $260,000 in federal farm subsidies.

When asked by anchor Chris Wallace on “Fox News Sunday” about the story’s assertion that her husband’s counseling clinic had also gotten federal and state funds, Bachmann replied that it was “one-time training money that came from the federal government. And it certainly didn’t help our clinic.”

At another point, she said, “My husband and I did not get the money,” adding that it was “mental health training money that went to the employees.”

But state records show that Bachmann & Associates has been collecting payments under the Minnesota’s Medicaid program every year for the past six years. Karen Smigielski, a spokeswoman for the state Department of Human Services, said the state’s Medicaid program is funded “about 50-50” with federal and state monies. The funds to Bachmann & Associates are for the treatment of low-income mentally ill patients and are based on a “fee for service” basis, meaning the clinic was reimbursed by Medicaid for the services it provided.

By stating that the payments were a “one-time” payment, Michele Bachmann was dishonest with the audience. She was clearly trying to downplay the issue, perhaps knowing that it hurts her credibility with that large group of grassroots conservatives across the country that she seeks support from.

Medicaid payments to her husbands business isn’t the only issue the congresswoman is going to face tough questions about. Michele Bachmann waves the Gadsden flag and calls herself an “outsider,” yet she hired many DC “insiders” to run her campaign. She came under some heat for hiring Ed Rollins, but most of those criticisms died down when her people had stated that Bachmann forced Rollins to apologize to Palin’s staff. I never saw any press accounts one way or the other whether Rollins actually apologized, or if those where just more empty words from Team Bachmann. Perhaps someone in the press will look into that one day.

Steve Bannon was right when he spoke about holding the banner of the Tea Party. The people within the movement won’t allow politicians to use their cause to simply advance themselves. They are aware and educated activists who are not easily fooled. When an elected official stands with them and speaks their language, they had better back it up with their actions.

3 responses to “Does Michele Bachmann ‘Walk the Talk?’”