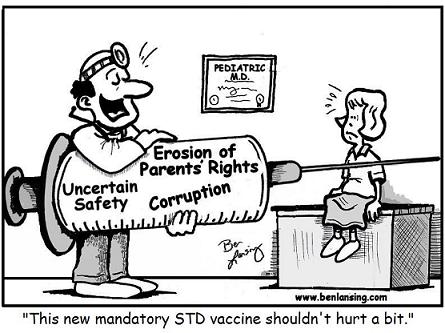 Timothy P. Carney of the Washington Examiner pointed this out on Wednesday night after the Republican debate:

Governor Perry, by executive order, required all girls to get vaccinated against HPV, or get . He got beat up for that in the debate a bit earlier. A lot of the discussion involved parental rights. I wanted to emphasize two points.

1) It looks like a dirty example of crony capitalism and the revolving door. Perry’s former chief of staff, Mike Toomey, was a lobbyist for Merck, the manufacturer of that vaccine. Merck pushed hard for the mandate and stood to profit from it.

2) Mandating an HPV vaccine is not like mandating a mumps vaccine. As Michelle Malkin pointed out, most vaccine mandates involve protecting other people’s kids from communicable diseases that can be spread in the classroom. HPV cannot be spread in any normal classroom spreading.

Carney gets the ball rolling exposing just one of the many pay-for-play deals Rick Perry has going in Texas.

Mike Toomey, Perry’s former chief of staff was a lobbyist for Merck. Toomey’s mother-in-law Diane White-Delisi, a former Texas State Representative [mine, in fact] is now state director for Women in Government, another group that gets money from Merck. In fact, Women in Government has been called “Merck’s Trojon Horse” [something well be exploring further in an upcoming article]

Keeping it all in the family, White-Delisi’s daughter-in-law Deirdra Delisi was appointed to the Texas Transportation Commission by Governor Perry.

It gets even more interesting as Diane and Ted Delisi own Delisi Communications, a firm that lobby’s for ReachOut HealthCare America among others.

If anyone wants to put in a bit of time and check out the Web of Influence surrounding Rick Perry they’ll find he has plenty of ties to lobbyists and plenty of opportunities for his brand of pay-for-play.

Merck is bankrolling efforts to pass laws in state legislatures across the country mandating it Gardasil vaccine for girls as young as 11 or 12. It doubled its lobbying budget in Texas and has funneled money through Women in Government, an advocacy group made up of female state legislators around the country.

Details of the order were not immediately available, but the governor’s office confirmed to The Associated Press that he was signing the order and he would comment Friday afternoon.

Toomey was expected to be able to woo conservative legislators concerned about the requirement stepping on parent’s rights and about signaling tacit approval of sexual activity to young girls. Delisi, as head of the House public health committee, which likely would have considered legislation filed by a Democratic member, also would have helped ease conservative opposition.

It wasn’t immediately clear how long the order would last and whether the legislation was still necessary. However it could have been difficult to muster support from lawmakers who champion abstinence education and parents’ rights.

Texas allows parents to opt out of inoculations by filing an affidavit stating that he or she objected to the vaccine for religious or philosophical reasons.

Even with such provisions, however, conservative groups say mandates take away parents’ rights to be the primary medical decision maker for their children.

The so called “opt-out” wasn’t going to be an easy thing, and why should parents be forced to go through the hassle? And as Carney points out, this isn’t like requiring kids to be vaccinated for smallpox or the measles. You can’t catch cancer.

This was a huge over-reach of government. Perry meddling in the business of Texas parents. Though Perry cries that he was only doing it “for the children” [a typical liberal excuse] all evidence points to Perry doing it for the money.

America doesn’t have time for the sort of politician that Rick Perry is. We have enough corruption in Washington already. No need to import any more in from Texas.