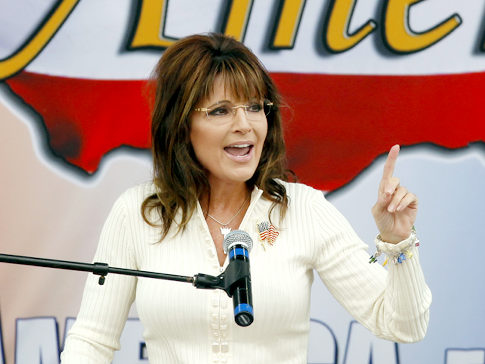 There has never been any doubt that Sarah Palin’s stance on corruption would appeal to everyone. Recently Sarah has been calling out corrupt crony capitalists like Barack Obama and Rick Perry. This is not new ground for her, as she has fought corruption since her earliest days in elected office.

The latest to speak out in support of Sarah is Ralph Nader. From Salon:

We decided to call the longtime left crusader about a speech Palin gave in Iowa earlier this month, one which seemed to mark the transformation of Palin from a standard-issue movement conservative to something more independent and more reformist. And Nader told us he liked what he heard.

“I think she’s a lot smarter than most people credit her,” says Nader. “Judging by her comments, she is squarely in the camp of conservative populism, opposed to corporatism and its corporate state.”

Palin delivered the speech in question in Indianola, Iowa, on Sept. 3. As Anand Giridharadas later observed in the Times, the media responded primarily by “ignoring the ideas she unfurled and dwelling almost entirely on the will-she-won’t-she question of her presidential ambitions.”

Some of the rhetoric was familiar. Palin slammed the “far left,” praised the Tea Party, and denounced the idea of more government spending.

But there was also some refreshingly new material. She described a “permanent political class,” one that is hypocritical and devoted to personally profiting off of government. (“Seven of the 10 wealthiest counties are suburbs of Washington, D.C.,” she noted.) She spoke of “the collusion of big government and big business and big finance.” And she took aim at both parties for governing in service of their big campaign contributors.

This sounded to us like Nader. And Nader agreed.

“When she was governor of Alaska she really did take on the oil industry, and [she also] approved a statewide referendum that resulted in the first state in the Union to regulate cruise lines and their pollution offshore,” he says. “So there is a precursor to these remarks.”

If Palin continues down the conservative populist path — and that’s a big “if“; let’s face it, she’s not exactly known for ideological consistency — Nader thinks the message will be a political winner.

“It’s endlessly elaborative. She could elaborate it with all kinds of newsworthy examples — abuses, prosecutions, convictions,” he says.

That will apply especially if she jumps into the current “corporatist” GOP presidential field, Nader says. “She’ll really draw a line between herself and the others, who will never encroach on this.”

Of course, Nader is right. The American political system has been hijacked by corrupt politicians who are more concerned with building up a power base than serving the needs of the people. Many career politicians have become incredibly wealthy with a “you scratch my back, I’ll scratch yours” way of doing business.

In exchange for their support, politicians, in both parties, craft legislation, hand out government contracts, and appoint cronies to positions where these cronies can effect the industries they serve.

I recently wrote of a prime example of this sort of thing.

In 2003 there were a lot of issues with homebuilders, including a rash of lawsuits over mold issues. Obviously the homebuilders weren’t happy, as all of this was costing them money. Enter good old Rick Perry.

Bob Perry, one of the top homebuilders in Texas, and someone who has given Rick Perry over $2 million over time, was able to cash in on his “investment” in Rick Perry. [The two are not related]

Rick Perry championed the creation of a state board, the Texas Residential Construction Commission. This commission oversaw any complaint against the homebuilder from the homeowner. The legislation that created this commission would severely limit the rights of homeowners to seek satisfactory results from complaints against the industry.

After the legislation’s passage, Bob Perry and his wife sent two $50,000 checks to the governor’s campaign. Three weeks later Rick Perry appointed one of Bob Perry’s boys [an executive at Perry Homes] to this commission, which was abolished in 2009.

Deals like this happen almost daily in politics. It’s one of the reasons America is in the shape it’s in.

One thing I have to correct from Justin Elliot’s Salon article. He implies that Sarah Palin hasn’t been consistent in her message. That simply isn’t true. It’s been her message throughout her entire 20 year political career. I suspect these are core beliefs she’s held much longer than that.

Sarah has certainly refined and expanded her message, but it’s always been the same.

Corruption in government must be wiped out for the Republic to survive. Members of both parties are guilty of being corrupt. That is where the problem really lies. No politician is going to take on their own party over corruption, because for most, it would be political suicide. At the same time, few go after corruption from the other party in a meaningful way, because they are likely to be in bed with some of the same people as the opposition.

Sarah Palin wasn’t afraid to go after corrupt members of her own party in Alaska. She took them down. She made cronyism a crime. It didn’t make her many friends in political circles, but the Alaskan people were grateful.