Obama Doing All He Can to Stop America From Being Energy Independent: Now Targeting Fracking 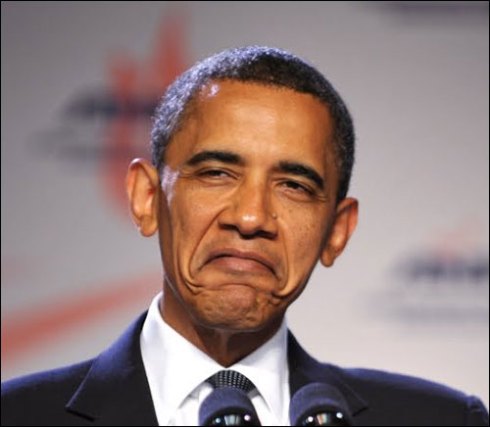 On Friday, with little fan-fare, Barack Obama signed an executive order that targets one of the real success stories in energy exploration, shale.

As you know, massive quantities of clean natural gas are locked away in shale deposits across the country. In March of 2011 Whitney Pitcher wrote an extensive report outlining all of the oil and natural gas deposits ready to be harvested.

While there are trillions of barrels of oil waiting to be tapped, the one number that stood out to me was the 1.67 QUADRILLION cubic feet of natural gas sitting in the Arctic. Another staggering number is found in the Green River Formation in Colorado, Wyoming, and Utah. There is said to be 1.5 trillion barrels of oil, or 6 times what is held in all of Saudi Arabia.

In the same report I noted that out of the 2.6 trillion known barrels of shale oil in the world, 2 trillion barrels of that oil is in the United States.

We are in a perfect place to be totally energy independent, and yet, Barack Obama is doing everything he can to stop this from happening. It’s immoral and borders on the criminal. We’ve written dozens of articles outlining the corruption and cronyism going on within Obama’s many “green” projects. We see a new report almost daily of an Obama regime funded company going out of business, after stealing millions, if not billions of tax payer dollars.

The fact is “green” energy, for the most part, isn’t economically viable. They only live because governments …. local, state, and federal, pour billion of dollars into them in the form or subsidies, tax incentives, and outright loans. Take away the tax payer subsidies, and they are gone.

All of this must stop.

Unlike all of these “green” fiascoes, oil and gas exploration doesn’t need massive government subsidies to survive. Just the opposite, in fact. Oil companies pay incredible amounts of taxes, as they should. Obama’s plan steals tax payer money and gets nothing but failure in return.

Energy production, if allowed to grow, will created millions of good paying, durable jobs. It will add billions of dollars to the treasury in the form of taxes. As exploration grows, and infrastructure is needed, the jobs created in the industry will also see other jobs created as well. You’ll need more people to service the workers in the industries. More restaurants, more stores, more houses. Every one of these new jobs will also add tax dollars to the cause.

For some reason, Obama is dead set against anything that will actually grow the economy. It’s like he is purposely tying to destroy it instead.

For more on what Obama is trying to do with his latest scheme, check out The Hill.

There is a lot of misinformation out there about natural gas as well as fracking. Here’s what you need to know about natural gas, as a motorfuel, and why many people, including myself, see it as a real bridge to the future.

Some people worry about water quality in areas of shale exploration, but we are learning it’s not the problem alarmists claim.

Shale has a radioactive signature—from uranium isotopes such as radium-226 and radium-228—that geologists and drillers often measure to chart the vast underground formations. The higher the radiation levels, the greater the likelihood those deposits will yield significant amounts of gas. But that does not necessarily mean the radioactivity poses a public health hazard; after all, some homes in Pennsylvania and New York have been built directly on Marcellus shale.

Tests conducted earlier this year in Pennsylvania waterways that had received treated water—both produced water (the fracking fluid that returns to the surface) and brine (naturally occurring water that contains radioactive elements, as well as other toxins and heavy metals from the shale)—found no evidence of elevated radiation levels.

Conrad Dan Volz, former scientific director of the Center for Healthy Environments and Communities at the University of Pittsburgh, is a vocal critic of the speed with which the Marcellus is being developed—but even he says that radioactivity is probably one of the least pressing issues. “If I were to bet on this, I’d bet that it’s not going to be a problem,” he says.

Texas has passed a law requiring developers disclose what is in the fluid used in fracking, look for other states to follow suit.

Under mounting pressure, companies such as Schlumberger and Range Resources have posted the chemical compounds used in some of their wells. Texas became the first state to pass a law requiring full public disclosure. This greater transparency has revealed some oddly benign ingredients, such as instant coffee and walnut shells—but also some known and suspected carcinogens, including benzene and methanol.

Even if these chemicals can be found under kitchen sinks, as industry points out, they’re poured down wells in much greater volumes: about 5000 gallons of additives for every 1 million gallons of water and sand. A more pressing question is what to do with this fluid once it rises back to the surface.

In Texas’s Barnett Shale, wastewater can be reinjected into impermeable rock 1.5 miles below ground. This isn’t feasible in the Marcellus Shale region; the underlying rocks are not porous enough. Currently, a handful of facilities in Pennsylvania are approved to treat the wastewater. More plants, purpose-built for the task, are planned. In the meantime, most companies now recycle this water to drill their next well.

It’s claimed that fracking contaminates groundwater. We’re finding it doesn’t, however, surface spills are another story.

In the past two years alone, a series of surface spills, including two blowouts at wells operated by Chesapeake Energy and EOG Resources and a spill of 8000 gallons of fracking fluid at a site in Dimock, Pa., have contaminated groundwater in the Marcellus Shale region. But the idea stressed by fracking critics that deep-injected fluids will migrate into groundwater is mostly false.

Basic geology prevents such contamination from starting below ground. A fracture caused by the drilling process would have to extend through the several thousand feet of rock that separate deep shale gas deposits from freshwater aquifers. According to geologist Gary Lash of the State University of New York at Fredonia, the intervening layers of rock have distinct mechanical properties that would prevent the fissures from expanding a mile or more toward the surface.

It would be like stacking a dozen bricks on top of each other, he says, and expecting a crack in the bottom brick to extend all the way to the top one. What’s more, the fracking fluid itself, thickened with additives, is too dense to ascend upward through such a channel.

EPA officials are closely watching one place for evidence otherwise: tiny Pavillion, Wyo., a remote town of 160 where high levels of chemicals linked to fracking have been found in groundwater supplies. Pavillion’s aquifer sits several hundred feet above the gas cache, far closer than aquifers atop other gas fields. If the investigation documents the first case of fracking fluid seeping into groundwater directly from gas wells, drillers may be forced to abandon shallow deposits—which wouldn’t affect Marcellus wells.

The bottom line is shale deposits are a highly viable source of oil and natural gas. Fracking is a reasonably safe method of energy development, and actually contributes to the economy.

We can’t allow America to continue on the course that Barack Obama and his party has set us on. We are more dependent on foreign oil, not less. We are sending almost a trillion dollars a year out of the country, much of it to nations that not only hate us, but use that money we send directly against us. It’s insane.

To learn more about fracking, and shale in general, check out EnergyFromShale.org

4 responses to “Obama Doing All He Can to Stop America From Being Energy Independent: Now Targeting Fracking”