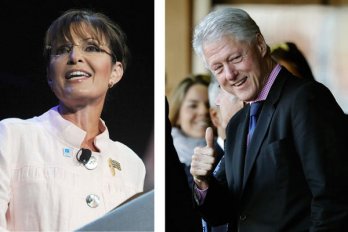 We published Stacy Drake and Whitney Pitcher’s great summary of Governor Sarah Palin’s Incredible Executive Accomplishments last week. While formatting the article for our website, I checked out one of the few articles about the Governor I had missed over the years.

The Wall Street Journal noted that Sarah Palin, as Governor of Alaska, sat in one of the most powerful state offices in the nation. Stacy referenced this in her summation, noting that Governor Palin had sweeping powers that most Governors do not, and are shared by only a handful of others.

The Alaskan people, when writing their constitution, wanted their Governor to be a true CEO. They wanted the buck to stop at the Governor’s desk. We know by looking over Governor Palin’s record, that she used her Executive powers wisely.

Those of us who were following Governor Palin’s career well before she was chosen to be John McCain’s running mate knew, that she had more control than California or Texas’ executive, and that she had a bigger budget and was responsible for more state employees than the previous democrat president. The Journal reinforces that here: [emphasis mine]

One rap on Sarah Palin’s qualifications to be Vice President is that she governs one of our least populated states, with a budget of “only” $12 billion and 16,000 full-time state employees. On the other hand, it turns out that the Governor’s office in Alaska is one of the country’s most powerful.

For more than two decades Thad Beyle, a political scientist at the University of North Carolina, has maintained an index of “institutional powers” in state offices. He rates governorships on potential length of service, budgetary and appointment authority, veto power and other factors. Mr. Beyle’s findings for 2008 rate Alaska at 4.1 on a scale of 5. The national average is 3.5.

Only four other states — Maryland, New Jersey, New York and West Virginia — concentrate as much power in the Governor’s office as Alaska does, and only one state (Massachusetts) concentrates more. California may be the nation’s most populous state, but its Governor rates as below-average (3.2) in executive authority. This may account in part for Arnold Schwarzenegger’s poor legislative track record. The lowest rating goes to Vermont (2.5), where the Governor (remember Howard Dean) is a figurehead compared to Mrs. Palin.

In Alaska, the Governor has line-item veto power over the budget and can only be overridden by a three-quarters majority of the Legislature. In 1992, the year Arkansas Governor Bill Clinton was elected President, his state budget was $2 billion and among the smallest in the country. Compared to that, Sarah Palin is an executive giant.

This isn’t a put-down of Bill Clinton, as Governor or President, just a statement of fact. Clinton has actually had a lot of very nice things to say about Sarah, and he’s said them to the democrat media, something that has likely caused many a case of heartburn. 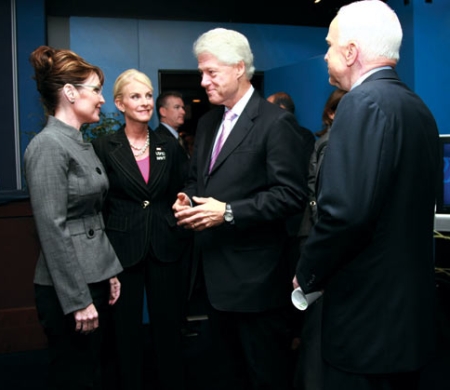 “In the Republican primaries she’s very popular with the conservative base.  She gets more people to come out,” he told me. “And she hasn’t won all of her endorsements, but she’s won most of them.  And you know, she’s a compelling, attractive figure.”

I asked Clinton to react to Halperin’s take on the former Alaska governor that “Most of all, she is like Bill Clinton: what doesn’t kill Sarah Palin makes her stronger.”Clinton laughed and then offered his own observations.

“I do think she’s a resilient character. And we may be entering a sort of period in politics that’s sort of fact free, where the experience in government is a negative,” he told me.

“I think she’s clearly a public figure who is, who speaks well and persuasively to the people who listen to her.  And she’s somebody to be reckoned with,” he said. “And she’s tough.”

Clinton recalled when “people were making fun of her” he read about Palin’s husband finishing the last 500 miles of Alaska’s Iron Dog race with a broken arm.

“Now, where I come from people like that. They think that’s pretty good,” he said.

Lately [as in daily for the past few months] the liberal media, as well as Establishment Republicans™ [especially those surrounding the Romney campaign] have been peddling the outright lie that Sarah Palin cost John McCain the election, and wasn’t prepared to be President, or for that matter, Vice President. Never mind the fact that she was vetted, and recommended, by former Reagan adviser A.B. Culvahouse who has successfully vetted both V.P. Candidates and potential Supreme Court nominees for years.

We all know why McCain lost, and it had nothing to do with Sarah Palin, unless you want to count the fact that McCain’s incompetent campaign manager Steve Schmidt and co-conspirator Nicole Wallace, mishandled the Governor and wouldn’t allow her to do HER job, and help vet, then Senator, Barack Obama. Schmidt and Wallace committed one of the most extreme cases of political malpractice in our nation’s history.

Bill Clinton, whether he knew it or not, explained exactly why democrats, and the GOP Elites, fear Sarah Palin. She speaks well, has a clear message, and is an influencer and persuader. And she’s as tough as they come.

Stacy just published an article ripping The Fiscal Times a liberal rag that has today’s contribution to the meme that Governor Palin has screwed it up for all women, for all time.

Evidently, by the sheer volume of these articles over the past few months, someone must be worried that Mitt Romney might actually get a clue and realize Sarah Palin should be his running mate! A whole lot of bandwidth is being sacrificed to convince him, and the American people otherwise.

Check out Stacy’s article here. She has an incredible amount of resources linked that should kill these lies forever.

Frankly, I don’t care if someone likes Sarah Palin or not. Most of us do, and respect what she has done as a real leader. But even if you don’t care for her, every American should be alarmed by the nation’s dishonest media, and the liars in both the democrat and Republican parties. These corrupt bastards have the ability to harm anyone who will stand in their way. There are some decent human beings in both parties, but there are also some rotten bastards in both parties, and they are the ones in power. They are the ones who control both political parties.

These corrupt bastards want to stop Sarah Palin, and everyone like her. They understand that she wants to put them out of business.

I stand with Sarah Palin, because I know she stands for all of us.