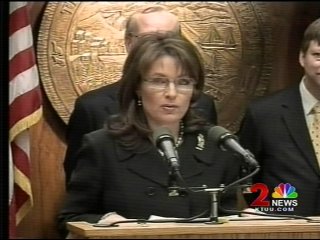 A great video put together by Ron Devio and wonderfully narrated by SarahNET Radio’s Kevin Scholla. An interesting look at Sarah Palin’s leadership style, and something folks may want to bookmark for future reference:

Governor Palin is a transformational leader in the grand tradition of Ronald Reagan. When she took office as Mayor of Wasilla, Alaska, she took what was essentially a dirt road village, and turned it into the fastest growing city in the state. Mayor Palin built infrastructure, lured major businesses into town, and before long, Wasilla was the trading hub for the entire Mat-Su Valley, an area roughly the size of the state of Delaware. Oh, and she did all of this while actually lowering city taxes!

To this day the current Mayor of Wasilla credits Sarah Palin with the fact some 50,000 shoppers a week come to Wasilla. It was her policies that made the city such a powerful trading hub.

Of course, Sarah’s many accomplishments as Governor have been well documented here. It’s been said that Sarah Palin got more done in her one term as Governor than most politicians, including two term Presidents will in a career, and as a young woman, Sarah has a lot more her career left to add to those numerous [and impressive] accomplishments.

It’s no secret that we support Governor Palin, and would love nothing more to see her run for President in 2016. America needs, and deserves solid, responsible leadership. The kind of leadership Sarah Palin can bring.

Filed under In The News, Politics, Ronald Reagan, sarah palin