While the GOP issued a 2012 GOP “autopsy report” yesterday, Governor Palin played political apothecary on Saturday in her barn burner of a speech on Saturday at CPAC. Her prescription for the GOP and the conservative movement was not one of consultants, pandering, navel gazing, and restraint of principles, but a prescription of the grassroots, outreach,optimism, and liberty. If the energy from the ballroom where she gave her speech could be harnessed, America would be energy independent in no time.

Governor Palin realizes that the circumspection for the GOP post-2012 should be pretty simple: the GOP lost, and President Obama won. Rather than dwelling on the defeat, she opted for a positive, “tundraroots” message of looking to focusing on the people, rather than the politicians and consultants. In doing so, she lreferenced an op-ed penned by fellow Lady Liberty, Margaret Thatcher, after her party lost in England in the mid 1970s which in part read:

Politicians should not be either professional efficiency experts or amateur industrial consultants. Their concern is with people, and they must look at every problem from the grassroots, not from the top looking down. International interest rates must be thought of in terms of the young couple’s mortgage as well as of the balance of payments.

Her speech was a rhetorical Expo Eraser to the dry erase board wielding architects of the Republican party. She called out the architects of political destruction like Karl Rove and called for re-building the country rather than attempting to re-brand a party. She called for liberty in the political process and encouraged more everyday Americans to run for office free from the constraints of focus groups, pollsters, and the like that are nothing more than political pyramid schemes.

As has been her bread and butter issue for her entire political career, she called out the cronyism of the permanent political class and called for embracing pro-free market principles. Again, she focused on liberty. The liberty that comes from opportunity of the invisible hand of the market, not the clenched fist of socialism or the hand-in-hand workings of crony ties between business and government.

One part of her speech that received the greatest crowd approval was Governor Palin’s recognition of the College Republicans. In doing so, she called for young conservatives to not only drink Sam Adams, but to think Sam Adams. Adams, of course, was one of the Founding Fathers and signer of the Declaration of Independence. His words more than 230 years ago were akin to Governor Palin’s speech when he said, “Nil desperandum, — Never Despair. That is a motto for you and me. All are not dead; and where there is a spark of patriotic fire, we will rekindle it.” That’s the patriotic optimism of Palin and Adams.

What received the largest response however, as shown in the clip above (H/T Ryan), was not what she said, but what she did. In our image driven, visual culture, a meme is worth a million words, such the Palin “Liberty Pose” that has gone viral over the last several days, so much so that my grandma even shared it on her Facebook page (with no prompting from me whatsoever). With a single swig, Governor Palin took a shot at the government overreach of the Bloombergs of the political world. One of her heroes, C.S.Lewis once said, “[o]f all the tyrannies, a tyranny exercised for the good of the victim may be the most oppressive”, and Palin’s toast  brought that quote to life.

The media, who weeks before had written the Governor’s own “autopsy report” after she chose not to renew her contract with Fox, were all in attendance to document her supposed irrelevance. Here is just one section of the media covering her “irrelevance” during her speech: 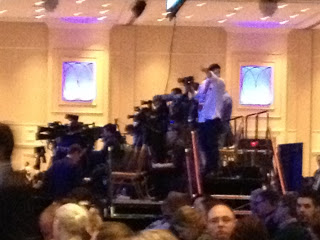 If that wasn’t indication enough of her continued influence, here is the list of the topics trending on Twitter immediately following her speech:

It’s not just about media coverage though–legacy media or social media–nor is about Governor Palin herself. It is about re-building a country, as she stated in her speech. Whatever her future plans may be, she certainly has called to arms those who toast to liberty along side of her and are willing to fight for liberty and American exceptionalism. It’s what #sarahpalindoes.

One response to “Here’s to Liberty!: Governor Palin’s CPAC Prescription”