Video: Catherine Engelbrecht of True The Vote Attacked by IRS, ATF, FBI, OSHA for Her Politics 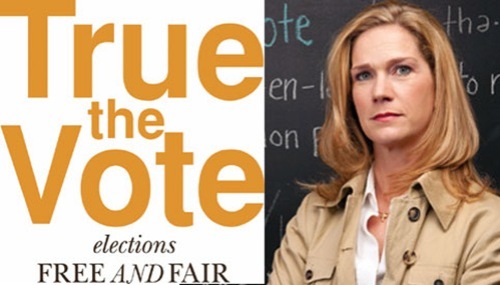 Out of all the assaults on Liberty and Freedom by the Obama regime, the story of Catherine Engelbrecht may be the most vile, and criminal.

Catherine Engelbrecht heads up the King Street Patriots, a Houston, Texas area Tea Party Group, and is President and founder of True The Vote, a group dedicated to stopping voter fraud.

Voter fraud runs rampant in the Houston area, which has a huge number of democrat voters. There has been strong resistance to any efforts that would clean up the corruption and stop the voter fraud.

Now we are learning just how strong the assault on King Street and True the Vote, as well as Catherine personally, has been.

Not only has Obama’s IRS assaulted Engelbrecht’s Liberty and Freedom, so have other agencies including the FBI, ATF, OSHA, and even a Texas agency.

Engelbrecht talked with Megyn Kelly earlier today about this full on assault:

Jillian Kay Melchior has an extensive write-up on the criminal assault on these Houston patriots:

Catherine Engelbrecht’s tale has all the markings of a classic conspiracy theory: She says she thinks that because of her peaceful political activity, she and her family was targeted for scrutiny by hostile federal agencies.

Yet as news emerges that the Internal Revenue Service wielded its power to obstruct conservative groups, Catherine’s story becomes credible — and chilling. It also raises questions about whether other federal agencies have used their executive powers to target those deemed political enemies.

Before the Engelbrecht family’s three-year ordeal began, Catherine says, “I had no real expectation or preparation for the blood sport that American politics is.” Sounding weary on the phone, she continues: “It’s all been a through-the-looking-glass experience.”

Cleta Mitchell, a lawyer who specializes in representing conservative organizations, says that the Engelbrecht family’s experience is “just the tip of the iceberg. . . . I think there’s definitely a Chicago-politics-style enemies list in this administration, and I think it permeates this branch of the federal government.”

The Engelbrechts were not, until recently, particularly political. They had been busy running a tiny manufacturing plant in Rosenberg, Texas. After years of working for others, Bryan, a trained machinist, wanted to open his own shop, so he saved his earnings, bought a computerized numerical-control machine, which does precision metal-cutting, and began operating out of his garage. “That was about 20 years ago,” he says. “Now, we’re up to about 30 employees.”

For two decades, Bryan and Catherine drove to work in their big truck. Engelbrecht Manufacturing Inc. now operates out of a 20,000-square-foot metal building on the prairie just outside of Houston, where a “semi-pet coyote lives in the field just behind us,” Bryan says. They went back to their country home each night. Stress was rare, and life was good.

But the 2008 elections left Catherine feeling frustrated about the debates, which seemed to be a string of superficial talking points. So she began attending tea-party meetings, enjoying the political discussion. A spunky woman known for her drive, Catherine soon wanted to do more than just talk. She joined other tea partiers and decided to volunteer at the ballot box. Working as an alternate judge at the polls in 2009 in Fort Bend County, Texas, Catherine says, she was appalled and dismayed to witness everything from administrative snafus to outright voter fraud.

These formative experiences prompted her to found two organizations: King Street Patriots, a local community group that hosts weekly discussions on personal and economic freedoms; and True the Vote, which seeks to prevent voter fraud and trains volunteers to work as election monitors. It also registers voters, attempts to validate voter-registration lists, and pursues fraud reports to push for prosecution if illegal activity has occurred.

Bryan says that when his wife began focusing on politics, working less often at the manufacturing shop, “I told her, ‘You have my undying support.’” He pauses, then adds in his thick Texan drawl: “Little did I know she’d take it this far!”

In July 2010, Catherine filed with the IRS seeking tax-exempt status for her organizations. Shortly after, the troubles began.

That winter, the Federal Bureau of Investigation came knocking with questions about a person who had attended a King Street Patriots event once. Based on sign-in sheets, the organization discovered that the individual in question had attended an event, but “it was a come-and-go thing,” and they had no further information on hand about him. Nevertheless, the FBI also made inquiries about the person to the office manager, who was a volunteer.

The King Street Patriots weren’t the only ones under scrutiny. On January 11, the IRS visited the Engelbrechts’ shop and conducted an on-site audit of both their business and their personal returns, Catherine says.

“What struck us as odd about that,” she adds,“is the lengths to which the auditor went to try to — it seemed like — to try to find some error. . . . She wanted to go out and see [our] farm, she wanted to count the cattle, she wanted to look at the fence line. It was a very curious three days. She was as kind as she could be, and she was doing her job . . . [but]it was strange.”

Bryan adds: “It was kind of funny to us. I mean, we weren’t laughing that much, but we knew we were squeaky clean. Our CPA’s a good guy. And who says God doesn’t have a sense of humor: I got a little bit of a refund.”

Two months later, the IRS initiated the first round of questions for True the Vote. Catherine painstakingly answered them, knowing that nonprofit status would help with the organization’s credibility, donors, and grant applications. In October, the IRS requested additional information. And whenever Catherine followed up with IRS agents about the status of True the Vote’s application, “there was always a delay that our application was going to be up next, and it was just around the corner,” she says,

As this was occurring, the FBI continued to phone King Street Patriots. In May 2011, agents phoned wondering “how they were doing.” The FBI made further inquiries in June, November, and December asking whether there was anything to report.

The situation escalated in 2012. That February, True the Vote received a third request for information from the IRS, which also sent its first questionnaire to King Street Patriots. Catherine says the IRS had “hundreds of questions — hundreds and hundreds of questions.” The IRS requested every Facebook post and Tweet she had ever written. She received questions about her family, whether she’d ever run for political office, and which organizations she had spoken to.

“It’s no great secret that the IRS is considered to be one of the more serious [federal agencies],” Catherine says. “When you get a call from the IRS, you don’t take it lightly. So when you’re asked questions that seem to imply a sense of disapproval, it has a very chilling effect.”

On the same day they received the questions from the IRS, Catherine says, the Bureau of Alcohol, Tobacco, Firearms and Explosives (ATF) launched an unscheduled audit of their machine shop, forcing the Engelbrechts to drop everything planned for that day. Though the Engelbrechts have a Class 7 license, which allows them to make component parts for guns, they do not manufacture firearms. Catherine said that while the ATF had a right to conduct the audit, “it was odd that they did it completely unannounced, and they took five, six hours. . . . It was so extensive. It just felt kind of weird.”

That was in February. In July, the Occupational Safety and Health Administration paid a visit to Engelbrecht Manufacturing while Bryan, Catherine, and their children were out of town. The OSHA inspector talked with the managerial staff and employees, inspecting the premises minutely. But Bryan says the agent found only “little Mickey Mouse stuff, like, ‘You have safety glasses on, but not the right kind; the forklift has a seatbelt, but not the right kind.’” Yet Catherine and Bryan said the OSHA inspector complimented them on their tightly run shop and said she didn’t know why she had been sent to examine it.

Not long after, the tab arrived. OSHA was imposing $25,000 in fines on Engelbrecht Manufacturing. They eventually worked it down to $17,500, and Bryan says they may have tried to contest the fines to drive them even lower, but “we didn’t want to make any more waves, because we don’t know [how much further] OSHA could reach.”

“Bottom line is, it hurt,” he says. Fifteen thousand dollars is “not an insignificant amount to this company. It might be to other companies, but we’re still considered small, and it came at a time when business was slow, so instead of giving an employee a raise or potentially hiring another employee, I’m writing a check to our government.”

A few months later, True the Vote became the subject of congressional scrutiny. In September, Senator Barbara Boxer (D., Calif.) wrote to Thomas Perez, then the assistant attorney general of the civil rights division at the Department of Justice (who has now been nominated for labor secretary). “As you know, an organization called ‘True the Vote,’ which is an offshoot of the Tea Party, is leading a voter suppression campaign in many states,” Boxer wrote, adding that “this type of intimidation must stop. I don’t believe this is ‘True the Vote.’ I believe it’s ‘Stop the Vote.’”

And in October, Representative Elijah Cummings (D., Md.), the ranking minority member of the House Committee on Oversight and Government Reform, attacked True the Vote in a letter. He wrote that “some have suggested that your true goal is not voter integrity, but voter suppression against thousands of legitimate voters who traditionally vote for Democratic candidates.” He added that: “If these efforts are intentional, politically motivated, and widespread across multiple states, they could amount to a criminal conspiracy to deny legitimate voters their constitutional rights.” He also decried True the Vote on MSNBC and CNN.

Catherine now says that she “absolutely” thinks that because she worked against voter fraud, the Left was irked and decided to target her.

This is mind-blowing, but shows EXACTLY how far liberals will go to destroy those who try to stop their corrupt ways. We all know voter fraud and voter intimidation are staples of the democrat party. Have been for over a century.

As we saw when some states passed voter ID laws, laws requiring someone to show their proper ID before voting, democrats will go to any length, including going to court, and pulling out their shop-worn race cards, to thwart any attempt by concerned Americans to make sure the vote is actually legitimate.

What we have is an out of control, thug government. It’s unaccountable to the people. In fact, our own government sees the people as it’s enemies. Not good.

All of these criminals must be brought to justice. Americans MUST take our government back, by whatever means necessary. We can no longer trust any element of government to have America’s best interest at heart.

15 responses to “Video: Catherine Engelbrecht of True The Vote Attacked by IRS, ATF, FBI, OSHA for Her Politics”