Biology, the Bible, and Breadwinners 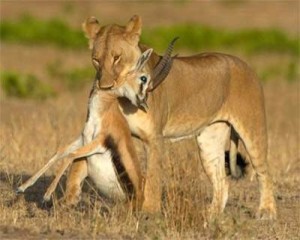 This week, political pundit (and known pursuant of a passport to MILF-istan, if Governor Palin is in charge) Erick Erickson made some rather absurd and poorly phrased statements regarding a recent study indicating that more and more women have become the primary breadwinner in their families:

“I’m so used to liberals telling conservatives that they’re anti-science. But liberals who defend this and say it is not a bad thing are very anti-science. When you look at biology — when you look at the natural world — the roles of a male and a female in society and in other animals, the male typically is the dominant role. The female, it’s not antithesis, or it’s not competing, it’s a complementary role.”

Erickson seems to be conflating providing for one’s family as being “dominant”, and it is a horrible choice of words. If he had chosen the rhetoric and tone of the last sentence of the above excerpt, he wouldn’t be hit by even those of us on the Right like he is right now.

In “biology”, since that’s the term Erickson wants to use, there are a wide range of family structures. Very few species are monogamous. Bald eagles are among the few. Additionally,despite popular belief to the contrary, the female African lion does more hunting than the male lions. In other words, they are the primary breadwinners of the pride. Heck, in one species–the seahorse–the male carries the fertilized eggs! So much for pointing to biology for an example to prove so called male “dominance”.

Erickson later posts at a RedState a supposed clarification of his comments, yet he emphasizes the concept of males being “dominant”. Perhaps it is just semantics, but it is a poor way to try to simultaneously emphasize “complementary” roles in marriage.

Erickson professes to be a Christian, and the Bible says a lot about men’s and women’s roles in a marriage and in a family. There is a lot about women being breadwinners alongside their husbands. There is the oft quoted “Woman of Noble Character” described in Proverbs 31, where the woman acts as clothing designer, cook, land trader, farmer, and merchant in addition to her roles within the her family. In Acts, the author Luke discusses the roles of Priscilla and Acquila both as tentmakers, not just Acquila. When the apostle Paul discusses the roles of men and women in marriage, he writes to the church in Ephesus:

22 Wives, submit yourselves to your own husbands as you do to the Lord. 23 For the husband is the head of the wife as Christ is the head of the church, his body, of which he is the Savior. 24 Now as the church submits to Christ, so also wives should submit to their husbands in everything.

25 Husbands, love your wives, just as Christ loved the church and gave himself up for her 26 to make her holy, cleansing her by the washing with water through the word, 27 and to present her to himself as a radiant church, without stain or wrinkle or any other blemish, but holy and blameless. 28 In this same way, husbands ought to love their wives as their own bodies. He who loves his wife loves himself. 29 After all, no one ever hated their own body, but they feed and care for their body, just as Christ does the church— 30 for we are members of his body. 31 “For this reason a man will leave his father and mother and be united to his wife, and the two will become one flesh.”32 This is a profound mystery—but I am talking about Christ and the church. 33 However, each one of you also must love his wife as he loves himself, and the wife must respect her husband.

The role of the husband is not one of dominance, but of devotion to his wife.

However, often lost when this passage is referenced is the verse that comes before the above excerpt, which reads, “submit to one another out of reverence for Christ”. Submission is not limited to a wife’s relationship to her husband. It is a call for selflessness in all who profess Christ.

I grew up in a home where my mom’s role was as a “domestic engineer”, as she called it. Between church, my sister’s and my school, and the community, my mom probably volunteered the equivalent weekly hours of a full time job. After having kids, she did not have a paying job until I was in high school. Even then, my dad was still the primary breadwinner. It is my personal belief that, more often than not, two parent homes provide much greater spiritual, emotional, and financial stability. However, there are many bad situations where both a mom and dad are present, and there are a lot of good situations where there are single parents involved. Erickson does recognizes this to an extent in his clarification, but it gets lost in the “dominance” rhetoric and sweeping generalizations.

Broken marriages and homes are symptoms of a fallen man, and they cannot be fixed by political punditry. There is opportunity for spiritual renewal in America that can provide a better society for politics to operate, but we cannot fix such problems with politics. Otherwise, we just become social conservatives wanting government to be god. We must face societal realities in solving economic and political problems. Personally, I like the way Representative Marsha Blackburn responded to the news of the “female breadwinners” study when she tweeted:

40% of women are now breadwinners. It is why economy is issue #1 & we need to create more #jobs to up wages. tinyurl.com/od3ywov

Continue to remember that economic problems are just that, economic problems. That isn’t to say that the importance of a strong family structure can’t be noted, but when the rhetoric of “dominance” dominates,then the rhetoric of complementary roles is overshadowed. Otherwise, conservatism, a movement founded in independence and real equality, becomes mired by paternal rhetoric.

One response to “Biology, the Bible, and Breadwinners”