Re-Visiting the Palin Doctrine: Why Gov. Palin’s Comments on Syria Shouldn’t Surprise Anyone 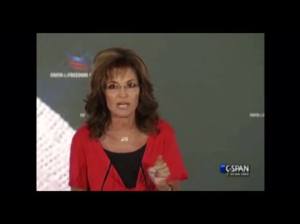 One of the lines that stood out in Governor Palin’s speech at the Faith and Freedom Coalition last week centered on her disapproval of aiding the Syrian rebels. “Both sides are slaughtering each other as they scream over an arbitrary red line ‘Allahu akbar’ … I say let Allah sort it out.”, Palin said at the event. This line drew headlines,  predictable outrage from neoconservatives, and even surprise from some. However, it should not be surprising. Over the last few years, Governor Palin has articulated a foreign policy that rejects the false choice between neoconservatism and non-interventionism. She has spoken not only about when America should not intervene militarily, but also when they should not provide other forms of assistance to volatile regions around the globe.

In May 2011, Governor Palin gave a speech at a “Tribute to the Troops” event where she laid out a clear, 5 point “doctrine” of when American troops should be involved:

There’s a lesson here then for the effective use of force, as opposed to sending our troops on missions that are ill-defined. And it can be argued that our involvement elsewhere, say in Libya, is an example of a lack of clarity. See, these are deadly serious questions that we must ask ourselves when we contemplate sending Americans into harm’s way. Our men and women in uniform deserve a clear understanding of U.S. positions on such a crucial decision. I believe our criteria before we send our young men and women—America’s finest—into harm’s way should be spelled out clearly when it comes to the use of our military force. I can tell you what I believe that criteria should be in five points.

First, we should only commit our forces when clear and vital American interests are at stake. Period.

Second, if we have to fight, we fight to win. To do that, we use overwhelming force. We only send our troops into war with the objective to defeat the enemy as quickly as possible. We do not stretch out our military with open-ended and ill-defined missions. Nation building is a nice idea in theory, but it is not the main purpose of our armed forces. We use our military to win wars.

Third, we must have clearly defined goals and objectives before sending troops into harm’s way. If you can’t explain the mission to the American people clearly and concisely, then our sons and daughters should not be sent into battle. Period.

Fifth, sending in our armed forces should be the last resort. We don’t go looking for dragons to slay. However, we will encourage the forces of freedom around the world who are sincerely fighting for the empowerment of the individual. When it makes sense, when it’s appropriate, we will provide them with material support to help them win their own freedom.

This kind of “doctrine” of limited military intervention has continued to guide her analysis of America’s foreign policy, as I highlighted in a post in August 2011:

Today, in her Facebook post, Governor Palin offered her thoughts on the recent activity in Libya, evaluating the situation realistically and cautiously and highlighting how the “Palin Doctrine” would be applied in practice. She cautioned against “triumphalism” and warned of co-opting of Libyan liberation and the future Libyan government by radical Muslim groups like the Islamic Libyan Fighting Group and al Qaeda, as is being done in Syria. Much in the same way, she had warned against the takeover of Egyptian government by the Muslim Brotherhood after the ousting of President Mubarak in February. She also warned against committing troops to being involved in missions in Libya that would not be in America’s best interest, much in the same way that she blasted President Obama in April when she questioned President Obama’s lack of clarity on Libya and his decision to place US troops under foreign command. Her statement today was a weaving of multiple points of her military doctrine into a clear vision of what America’s role should be in Libya following the defeat of Gaddafi.

Following the attack on the Benghazi consulate last fall, the Obama administration issued an apology for the you tube video red herring that served as a scapegoat for the attack. At that time, Governor Palin ripped the president for “waiving the white flag”, as it ran counter to the constitutional protection of free speech, and urged the president to withdraw troops if their mission was to be counter to protecting the freedoms of Americans:

Look, if our fearless leaders insist on waiving the white flag like this, they may need to bring our troops home from the Middle East. No more blood, no more U.S. treasure spent, not one drop, if those in control of our troops’ lives and tax dollars going into things like this are going to capitulate, wait, apologize for a first amendment right of ours, freedom of speech, that our troops are over there fighting for. Sean, our commander in chief is contradicting what we believe our troop’s mission is and that is to protect freedom.

Governor Palin’s foreign policy vision is not so narrow, however, as to only consider the use of American troops abroad, but also America’s financial resources. In May 2011, Governor Palin wrote:

Foreign assistance of any kind should be reserved for allies and should be for humanitarian purposes only. Again, considering Governor Palin articulated this sentiment more than two years ago, it should surprise no one that Governor Palin believes that America should not intervene in Syria by providing arms to al Qaeda rebels.

Our political media across the spectrum try too often to dichotomize foreign policy, as if political leaders must either be Ron Paul or George W. Bush. This, of course, is a false choice. The “Palin doctrine” provides an America-centric alternative to neoconservatism and non-interventionism.