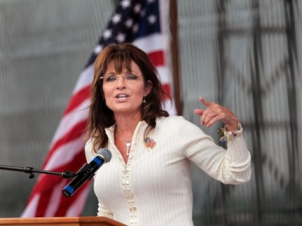 Gov. Palin has penned a piece over at Breitbart  in which she artfully makes the case as to why we are “Taxed Enough Already” and issues a warning to D.C. politicians on their votes for this compromised budget bill– “We’ll be watching.”

No one can argue with the fact that Paul Ryan’s compromise budget bill raises taxes and increases spending. Show me one Republican who got elected on that platform. Spare America the Orwellian word games. If the government is taking money out of your pocket to fund its growing Big Brother operations, it’s a tax. Whether money is taken from you via your phone bill, your airline ticket, or your income, it’s a tax. If politicians can’t be honest about this, it’s time to go home.

The TEA Party’s very acronym stands for “Taxed Enough Already.” We sent these politicians to Congress in an historic landslide election in 2010 with a mandate to stop the runaway spending train bankrupting our nation, not to wave to it from the station or – heaven forbid – increase its speed. And yet, here we are still pretending that there are no real world consequences to running up near trillion dollar deficits year after year with no end in sight.

So, where does this leave us? We can sit back and accept the increased spending “Compromised Plan” with increases in taxes and spending, or we can charge ahead to at least preserve the very modest Sequester cuts American workers already fought for. If we go with the first option, we simply kick the can down the road yet again and wait for the inevitable real world consequences of bankruptcy (see Detroit for an example of what’s in store). Or we can go with the second option and probably get clobbered by the media (so what’s new?!).

The Political Establishment will no doubt tell us that a budget battle will distract us from the fight against Obamacare. But that excuse is just the latest variation in the Establishment’s old canard that they’re keeping their powder dry for the next big battle which never seems to materialize because they’re always too busy waving the white flag and following the path of least resistance until election day.

Here’s the deal, folks. The media will clobber us no matter what. We do not want more taxes. We want Congress to rein in spending and live within its means. (What’s so radical about that?!) Americans have gotten quite an education recently in wasteful government spending as we’ve all seen how the federal government can blow a billion dollars on a website that doesn’t work.

Do these members of Congress really think they can justify every tax dollar they spend and still demand more from hard working Americans by increasing our taxes?

2014 is just around the corner. If any member of Congress thinks raising taxes and increasing wasteful spending is a winning strategy to run on, then by all means they should vote for the Ryan budget. We’ll be watching.

One response to “Palin: No New Taxes: “We’ll Be Watching!””