Bristol Palin Rips Wendy Davis to Shreds: You Can Have a Job AND Kids

Plus, it perfectly shows that – no matter what they say – feminism is a farce. If you truly believe in strong, independent women, you’d be a conservative.

Texas gubernatorial candidate Wendy Davis has been in the national news for a few days after her real life story was found to be quite different than the fairy tale she had cooked up. She and her rabid supporters have blamed Attorney General Greg Abbott [our next Governor] and his people, but the problem with that is Wayne Slater, the senior political writer for the Dallas Morning News is a hard core liberal, who wrote many a hit piece on George W Bush, and has said he’s had absolutely no contact with the Abbott campaign.

To be honest, I haven’t written a word about Davis, because she has a better chance of being made Pope than ever winning elected office in Texas again! You see, we haven’t elected a democrat to statewide office since 1994, and he was the last somewhat reasonable democrat left in the state! The reason Texas has become such an economic powerhouse, is because we don’t allow democrats in power. Now we have our share of liberal Republicans, and like anywhere else, we have to watch our politicians like a hawk watches chickens, but overall, Texas is governed by Conservative principles, and it works. Like America herself, Texas was created through bloody revolution and hard won Freedom. We aren’t about to allow the fascist democrat party to gain any real power here!

Wendy Davis is a radical gun grabbing, abortionist who represents everything Texans detest.

To give you an idea what a fools errand Davis’ campaign is, way back in October, Texas Monthly Magazine a rag known for two things, it’s guide to Texas BBQ, and is FAR LEFT politics, ran a massive cover story on Greg Abbott, seated in his wheelchair, holding a shot gun, with the caption: “The Gov“! 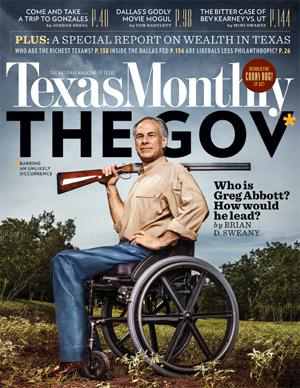 Inside is a mostly glowing account of Abbott’s life and career, which had to pain them to publish, as well as another article that basically says IF Davis only loses by 20 points it means that somehow, magically, Texas will turn “blue” someday …. maybe.

One of the revelations about Wendy Davis’ actual life, as opposed to the fictional one she created for her campaign, is that far from being a struggling mother living in a trailer, raising a family own her own, she in fact, hooked up with an older sugar daddy, who paid her way through Harvard, after cashing out his 401K! The day after her sugar daddy made the last payment to Harvard, she left, leaving him to raise their child. Oh, and Davis’ adult child, from another marriage, also chose to live with sugar daddy, rather than Wendy!

Anyhow, after seeing Davis and her supporters attack Abbott, for being a paraplegic, among other things, Bristol Palin has a message for the “Hero of the Left“:

Dear #WendyDavis, You Can Have a Job AND Kids http://t.co/shvzJDH1H1 @TwitchyTeam

Dear Wendy Davis, You Can Have a Job and Kids

If you aren’t paying attention to Texas politics right now, join the crowd. But the Democrat running for governor is just so awful you have to pay attention. Wendy Davis rose to the top of everyone’s minds because her story was so compelling.

This CNN headline summed it up:

Turns out, she lied about much of her “pulling herself up by her own bootstraps” story. Actually, she found a man to marry her, pay her way through college, and then through Harvard Law School. The day after he paid the last bill, she left him. By the way, she left her kids too. She said, “it’s not a good time for me right now” to be the custodial parent.

Is everyone paying attention? This woman is the hero of the Left? A woman whose ambition and ego were so big she couldn’t have both a career and kids at the same time.

Gosh, children are sooo inconvenient, huh? I’m glad my mother didn’t put motherhood on the shelf when she was elected to City Council, then became our mayor, then Governor. Oh sorry – I mentioned my mother… Have you liberals gone into a tail spin of hate already? Did I lose you?

I know you would rather think about Wendy Davis, so let’s get back to her. She’s more your type of woman. She left her kid, husband, made it into a false “made-for-tv-movie-type-tale” and then demanded that Texans have the right to kill babies. That’s the woman you libs can really get behind!

Let me be clear. I think it’d be so nice to have a husband take care of me, and my son, so I could attend school. (Any school — let alone, Harvard!)

But the way Wendy Davis did it – by getting married and leaving him as soon as the ink dried on his last check – is downright pathetic.

Plus, it perfectly shows that – no matter what they say – feminism is a farce. If you truly believe in strong, independent women, you’d be a conservative.

I have nothing to add, no way I could improve on what Bristol has said, other than to say there is more than one “Mama Grizzly up in Alaska! God bless this kid, she is from good stock!