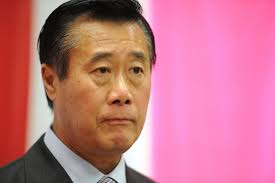 At Breitbart, Tony Lee writes of  CNN’s hypocrisy in their refusal to cover the gun trafficking charge levied at current California state senator (and secretary of state candidate until Thursday ), Leland Yee:

CNN dismissed complaints that the network was not covering last week’s shocking arrest of Democrat Leland Yee, the California state senator who was arrested for alleged arms trafficking and bribery, and falsely asserted that it does not give attention to state senators and secretary of state races.

That standard did not apply to Texas state Sen. Wendy Davis, whom CNN covered relentlessly. This was long before she even considered a gubernatorial run after filibustering a bill to ban abortions after 20 weeks and make those conducted before then safer.

Viewers and readers on Friday complained that the network, just like Politico, was not reporting or discussing Yee’s scandal online, and the official and verified @CNNWriters account tweeted to one critic that ignoring Yee’s arrest was standard practice.

Lee then linked a tweet from CNNWriters’ account which notes that CNN covers state senate and secretary of state races “just about never”. As he notes, CNN covered Texas state senator Wendy Davis extensively. The comparison of Davis vs. Yee illustrates CNN’s hypocrisy quite well, but what if we looked at CNN’s coverage of Yee vs. Yee? Let us flashback to 2010, shall we?

You may recall that Governor Palin gave a speech at California State University-Stanislaus in 2010, a speech that brought in record fundraising for the university. However, this particular speech may be better known as “bendystrawgate”.  California Democrats , including then attorney general and current governor Jerry Brown, wanted to investigate the contract that the university made with Palin for her speech. That contract included such diva-like demands as bendable drinking straws. The horrors! However, Brown was not the only Democrat to request the investigation. As CNN reported in April 2010 (emphasis mine):

Attorney General Jerry Brown opened an investigation Tuesday into the finances of the California State University Stanislaus Foundation, which raises money for the university and booked Palin to headline its June event.

“We are taking this action to make sure that the money raised goes toward the intended educational purposes and not a dollar is wasted or misspent,” said Brown, a Democratic gubernatorial candidate.

It’s no wonder that Governor Palin noted the media’s constant need to distract from the truth and selectively cover “local” politics.

For more on this, please see Gary’s posts from Friday.