March 12th:  Wow! I am truly honored to hear the news that Governor Palin has endorsed my candidacy for the U.S. Senate. When I asked Governor Palin to support me, I told her that we need a new generation of conservative leaders committed to fighting–and winning!–the battles that will determine the future of our country. I am humbled beyond words that she is supporting me. What a blessing!  ~ T.W. Shannon

T.W. SHANNON FOR U.S. SENATE FROM OKLAHOMA          Tom Coburn leaves large conservative shoes to fill as he retires from the U.S. Senate. At 6’5 feet tall, T.W. Shannon is just the leader to fill them. T.W. is the underdog in his race, but that’s… not a position he’s unfamiliar with. He’s had to beat the odds all of his life. He became the first Republican to ever win his district’s seat in the Oklahoma state legislature even though the naysayers said it couldn’t be done. When he sought to be Speaker of the House, the naysayers said he was too young and too conservative to win. But his colleagues chose him anyway, and he became the youngest Speaker in Oklahoma history!T.W.’s opponent has the backing of Beltway insiders, but T.W. has the passion and experience We the People need in Washington. As the former Speaker he can stand proud on his record of fighting for conservative legislation that directly benefited the lives of Oklahomans by lowering taxes, cutting government waste, and breaking the cycle of poverty by encouraging entrepreneurial self-reliance as the proven path to prosperity. T.W. understands that we need real leaders with vision and a steel spine to get things done. As he told me: “We are suffering from a lack of conservative vision. I believe we desperately need leaders with deep convictions who will fight—and win—the battles for conservative policies.”We can also rest assured that T.W. will bring to D.C. the integrity and moral compass he acquired growing up attending Bethlehem Baptist Church and teaching Sunday School. T.W. Shannon is exactly the kind of dynamic young conservative leader we need in Washington!
To learn more about T.W. Shannon and lend him your support, please visit his website at www.twshannon.com       ~ Sarah Palin

March 12th:  I am absolutely convinced that we need new leadership in D.C. That is why I’m running for U.S. Senate. The campaign trail can take candidates away from their families a lot. My family and I have pledged to pray daily for all those in this race as well as for their families. I’ve always believed that we are competitors not enemies. Please join us in praying for wisdom and humility. ~ T.W. Shannon

March 24th: Mark Levin endorses Shannon “I’ve taken a very close look at this race and have talked to a number of folks who know Shannon. I want to join great conservatives, like my friend Sarah Palin, in endorsing Shannon for Senate in Oklahoma. Shannon is very impressive and, I believe, understands the dire situation facing the nation.”

March 27th:  The Senate Conservatives Fund is on board! T.W.’s underdog campaign continues to gain momentum with the endorsement of an organization known for protecting Constitutional principles and conservative values. ~  T.W. Shannon 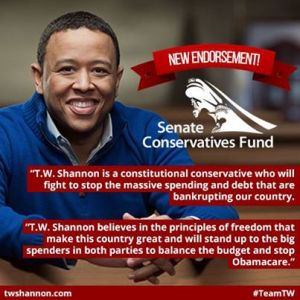 April 2nd  : Today, conservative United States Senator Mike Lee has endorsed my campaign for the U.S. Senate! Senator Lee has been one of the few conservative leaders challenging the status quo in Washington, D.C. and I am proud to have his support. ~   T.W. Shannon 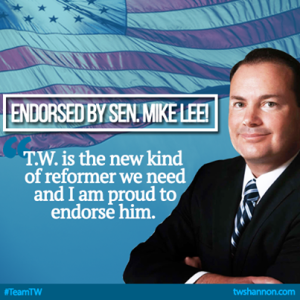 April 4th, Ben Carson:  I enjoyed having the opportunity to visit with my friend, Dr. Benjamin S. Carson, to talk about our shared faith, personal testimony, and the rejection of the lefts’ welfare dependency mentality for minorities. His endorsement means a lot to me personally, and for our campaign! T.W. Shannon 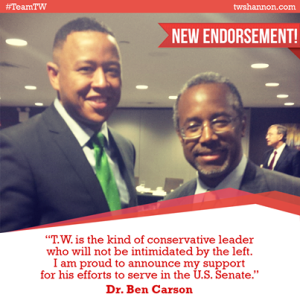 April 14th, Devon Shannon’s “Endorsement” In Case You Missed It: Have you seen my wife Devon’s new video about her story and testimony? She never ceases to amaze me and I know you’ll be moved by her words. Check it out now and SHARE with your friends and family to help us spread the word!  ~ T.W. Shannon

“T.W. Shannon is a strong Constitutional conservative who will fight for individual liberty and help turn our country around,” Sen. Cruz said. “T.W. embodies the American dream. I’m proud to offer T.W. my enthusiastic endorsement because not only will he vote the right way, but he’ll stand up and fight with us in the Senate to stop President Obama’s assault on our liberties and defend America’s founding principles.”

“One of the things I keep hearing as I travel the state is that my fellow Oklahomans feel like their personal freedoms are under assault,” said T.W. Shannon. “Whether it’s the government mandating health insurance we don’t want, or invading our privacy, or forcing people to violate their conscience by providing abortion drugs—Oklahomans now fear their own government is taking away their liberty.

“But it doesn’t have to be this way. Thomas Jefferson said when the people fear their government, there is tyranny; when the government fears the people, there is liberty. If conservatives here in Oklahoma and across America will unite, we can protect our God-given liberty, and take back this country.

“We need to send a message to Washington, D.C., and make our voices heard. I hope my fellow patriots from here in Tulsa and all across the state will join me with Gov. Palin, Sen. Cruz and Sen. Lee as we rally for Liberty here in the heartland.”

April 24th:  Freedom Works supports T.W.  Very exciting news that I hope I can count on you to help me SHARE! We’ve received the endorsement and support of one of the top conservative organizations in the nation: FreedomWorks is leading the fight for lower taxes, less government and more economic freedom for all Americans. I look forward to standing with them as Oklahoma’s next U.S. Senator. ~ T.W. Shannon

Awesome NEWS JUST IN for T.W. Shannon!Click here for FULL DETAILS T.W. Shannon has vaulted into the lead in the last month. The ballot movement in this race has been nothing short of dramatic: