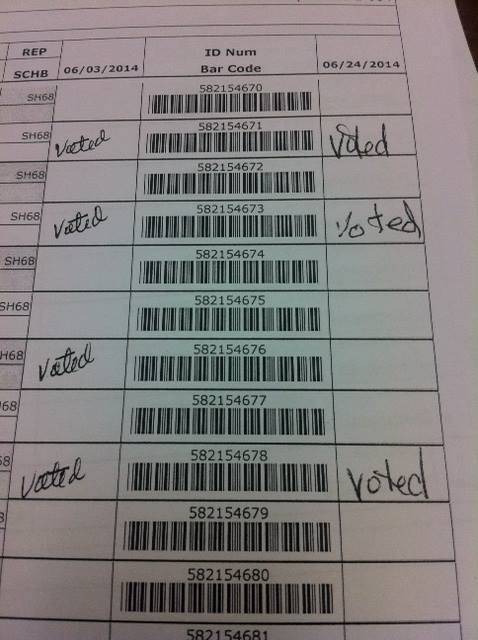 Within an article by Matthew Boyle at Breitbart is buried some very interesting quotes by democrat party leaders, who know exactly what went on in the June 24 run-off election in Mississippi.

Claude McInnis–the election coordinator for the Hinds County Democratic Party Executive Committee–estimated that after their review, McDaniel’s team will find about 3,000 total Democrats who voted in the June 3 Democratic primary and again in the GOP runoff on June 24 in his county.

“I’m going to guess 3,000,” McInnis said in a phone interview with Breitbart News. “It may be more, but I only have access to the Democratic votes, so that’s what I’m guessing the difference may be.”

Statewide, state Democratic Chairman Rickey Cole told Breitbart News, “It is very conceivable–it is highly conceivable” that McDaniel and his team “will find a number of irregularities that will reach 6,700 or greater.”

“You can’t predict these kinds of things,” Cole said when asked if he thinks a challenge from McDaniel would be successful, but “if I were in a race this close, I’d be doing the same thing.”

Cole said if McDaniel finds at least 6,700 Democrats who voted in the Democrat primary three weeks ago and the GOP runoff on Tuesday, a Mississippi court could actually demand a new election.

“You don’t have to prove who they voted for,” Cole said. “You just have to prove there were that many ineligible ballots. That puts the intent of the voting public in doubt, and that’s the path by which a court would order a new election.”

Besides any Democrats who voted in both the June 3 Democratic primary and the June 24 Republican runoff, McDaniel’s campaign is also reviewing absentee ballots.

Speaking to the increase in absentee ballots, Catherine Engelbrecht, head of True the Vote added:

“Here’s the things that we know: We know that mail-in absentee ballots were not subject to Mississippi’s new voter identification regulations,” Engelbrecht stated, adding:

“We know that, historically speaking, in the last several years, there have been numerous people jailed for absentee ballot harvesting and falsification of identities using absentee ballots. And we know of the Breitbart News video showing that absentees were again being harvested in the runoff and primary. I would go so far as to say when I tried to go and look at the absentee ballot applications this past week at two separate courthouses, I was not allowed to look at them.”

“Right now,” Engelbrecht says, “election officials and state GOP officials are not being forthcoming with absentee ballot applications. Her group has publicly called on Mississippi GOP Chairman Joe Nosef to refrain from certifying Tuesday’s runoff election until all the absentee ballots and applications are verified.” Nosef hasn’t responded to a request from Breitbart News about whether he’ll comply with the request to verify those votes before certifying the election. He also has not responded to a request about a call from McDaniel to intervene and order state party officials across Mississippi to cooperate with McDaniel’s allies who seek to verify the election’s outcome.

A 2006 study by the U.S. Election Assistance Commission, which interviewed several left of center, right of center, and nonpartisan election integrity experts nationwide, found that the absentee ballot process “is subject to the greatest proportion of fraudulent acts” over any other part of the election process in America.

Engelbrecht points to Mississippi law, which has fairly strict absentee ballot eligibility rules, as a reason why many of the absentee ballots could be thrown out, and she notes there’s plenty of other reasons why they could be discarded upon further review.

“There are so many pieces that would potentially invalidate many of these absentee ballots, for instance, if the application is not properly filled out, if the notary is not a proper and duly designated notary–which we’ve seen historically happen in Mississippi as it relates to absentee ballot harvesting,” Engelbrecht said. “Did they have somebody witness it? Did the signatures inside and outside the ballot envelopes match? All of these things need to be checked, and in a race this close, every vote matters.” She then asserted, “You don’t need a whole lot of election fraud; you just need a little bit in the right places to swing an election.”

I want to remind readers, it’s illegal to vote in both democrat and Republican primaries, for the same election. In other words, anyone who voted in the June 3 democrat party primary, could not, by law, vote in the June 24 GOP run-off election, which, of course, was to decide the winner of the GOP primary. It goes without saying a significant number of democrats voted illegally on June 24.

The evidence is going to take McDaniel and his allies some time to compile, as nothing in Mississippi is handled electronically; it’s all done by handwritten paperwork.

Mississippi has seen new elections called before; a judge called for one in the Hattiesburg mayoral race just last year, after similar actions to what McDaniel’s campaign is alleging occurred there. But for a U.S. Senate primary–and most likely a U.S. Senate seat, as the Republican nominee is expected to win in November–a judge ordering a new election because of widespread voter fraud would cause a political firestorm.