Something on the lighter side of things to start the day. As readers may have heard, Sarah Palin was going a little fast the other day in her hometown of Wasilla, Alaska. When stopped by the police, she “blamed” rock legend Sammy Hagar [jokingly, of course] for the offense.

Governor Palin was stopped on July 16 driving her Toyota Tundra pickup with the license plate “LUVUSA” and was fined $154 for driving 63 mph in a 45 mph zone. She was driving home from an early morning Bikram hot yoga workout in Anchorage, according to reports. As it happens she was listening to Sammy Hagar’s mega-hit “I Can’t Drive 55” before she was stopped!

“I was thinking, I wasn’t speeding, I was qualifying,” she said.

On Wednesday Sammy Hagar sent Governor Palin a tweet offering to pay her next speeding ticket, if she promises to “do better next time.” We assume that means breaking the century mark on the old speedometer!

Dear @SarahPalinUSA heard you were #GoingRogue on the gas pedal! I’ll cover your ticket if you promise to do better next time? #ICantDrive55

As you know, Governor Palin loves speed. Besides going to the Daytona 500 a few years back, she’s taken a ride at the Indy 500 festival with racing legend Parnelli Jones and hung out in the pits during the race with team owner Sarah Fisher-Hartman: 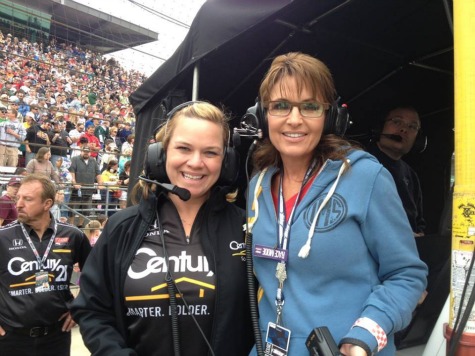 Filed under In The News, sarah palin