Palin to Louisianans: It’s Time for a Political Earthquake on Tuesday! 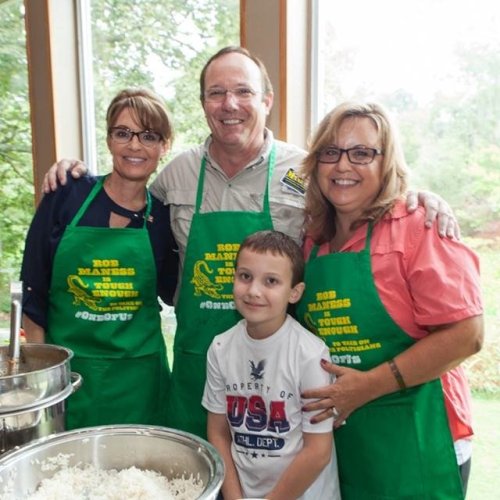 Here's a man of true grit and a servant's heart who knows full well when road kill needs to go. Our government… http://t.co/wJWZPVn3FA

The link above takes you to a video and the statement she made to Real Clear Politics:

In her statement to RCP, Palin appealed to revel in the act of sticking her thumb in the eye of the Republican “machine” that has coalesced around Cassidy, as she predicted that Louisiana would be “the epicenter of a political earthquake on Tuesday.”

“The GOP machine should never have broken promises,” Palin wrote in the statement. “They got involved in an open Republican primary because they don’t respect the wisdom of the people. They chose their guy, and now as they work against the Maness momentum they’re scurrying around with desperate lies in an attempt to swallow him up.”

Like a gator in the swamp, Col. Rob Maness may have been seen as sharply lurking, but is now ready to pounce. It is time. This is the election that will be the shocker on Tuesday.

The media bought into the false premise that this is a typical partisan establishment tiff between go-along-to-get-along politicians, Landrieu and Cassidy, and they’re missing the boat. Like that Louisiana alligator who can dominate the swamp, Maness is ready to be on top of D.C.’s food chain and devour the crony capitalism that runs wild in government. Status quo politicians like Landrieu had their chance to clean it up, but the establishment has partaken of the grub far too long, and voters know this.

The GOP machine should never have broken promises. They got involved in an open Republican primary because they don’t respect the wisdom of the people. They chose their guy, and now as they work against the Maness momentum they’re scurrying around with desperate lies in an attempt to swallow him up. Polls show the “expert” Washington consultants bet on the wrong horse. Their anointed candidate has a long record of liberal votes, many of those votes were quite recent. A survey I saw reveals Cassidy voted with Obama on 35 key votes, and he’s even voted for Sen. Landrieu, and dissed Ronald Reagan! Look, it’s most telling that the political machine’s deputized one won’t even show up at debates to defend his record. No wonder he’s slithering down in the polls and this race is slipping away from the GOP. It’s because Louisiana voters know they deserve better than Cassidy’s M.O.

I’ve been to Louisiana and seen the momentum — Col. Maness is the only conservative in the race and the clearest contrast and strongest pick to take on Mary Landrieu. His real life record of service, work ethic, positive policy ideas and commonsense resonates with voters. Here he’s fighting two powerful forces — two consummate politicians and both parties’ establishments — yet he’s the one showing real strength and keeping it positive. He’ll prevail because he’s fought and won tougher real life battles.

The momentum IS on Col. Maness’ side. The Louisiana primary system is the freest in the country and the GOP oppresses that freedom by working against him with false scare tactics and calling this good man a “spoiler” or “vote splitter,” and their attempts to shoot him down are backfiring. Louisianans are realizing there is little difference in voting for the two politicians in this race, and they’re looking to make their vote count and actually make a difference. They’re seeing they have the choice to send Washington a message, and that’s why I’m confident Louisiana will be the epicenter of a political earthquake on Tuesday with their vote for Rob Maness.

2 responses to “Palin to Louisianans: It’s Time for a Political Earthquake on Tuesday!”