Who is Mark Begich? 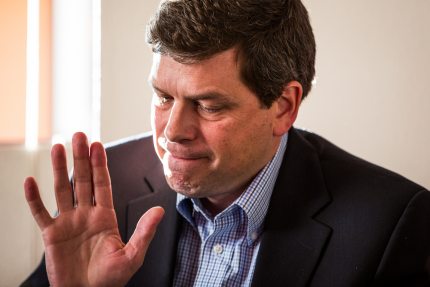 In 2008, Alaska’s junior senator, Mark Begich won his seat by the slimmest of margins, barely edging out incumbent Senator Ted Stevens. “Uncle Ted”, as Alaskans were fond of calling him, and was the longest serving Republican member of the Senate of all time. What tipped the scales for this unlikely win?

Was it the huge infusion of DNC cash? Wifely support from Begich’s wife, Deborah Bonito (former Chair of Alaska’s Democrat Party)? Was the brotherly support of unions, including former APDEA union leader, Rob Heun (who later received a federal commission as a US Marshall) a big help? Or could it have simply been the “Shadow Bosses” factor?

One thing is certain. It was a lucky break for Mr. Begich, when 60 days before the election, Senator Stevens was hit with ethics and corruption charges. Begich supporters, the DNC, and highly organized Outside interests had been relentless and vociferous in condemning Stevens. Then just 8 days before the election, Senator Stevens was convicted of felony violations. In spite of this, Stevens’ popularity and reputation for standing up for the rights of Alaska almost won him re-election. But Mark Begich had managed to pull in enough votes for a win.

After the election, however, the many disturbing discrepancies in the prosecution’s case led to a review and a request by the Attorney General to Judge Emmett Sullivan to dismiss the indictment. The judge complied and appointed a special prosecutor to conduct a criminal investigation of the federal prosecutors working on the Stevens case. It had been alleged that Senator Stevens had tried to conceal information on renovation of his modest Girdwood home on his senate financial disclosure form. The other counts concerned gifts, including a puppy from a charity event, a massage chair and a statue of a giant salmon. A key witness, David Anderson, came forward and acknowledged that he had provided false testimony. He admitted that the prosecution had allowed billing records from him to be entered into evidence even though they knew the records were not accurate. Bill Allen was convicted of bribery and conspiracy and was sentenced to 3 years in prison. A number of others were found guilty of lying and withholding information that would have cleared Senator Stevens.

The wrongful conviction of Senator Ted Stevens, just days before the election, was thrown out. But the damage was done. Alaska’s most experienced and ardent champion, a man who had served Alaska long before it had even achieved statehood, was gone from the senate. This powerful voice for Alaskans had been replaced by a man with little experience and few achievements.

We know Senator Mark Begich’s record in the senate. Other than being a deciding vote for Obamacare, he has accomplished little, getting just one bill passed… to re-name a courthouse in Anchorage. “…Begich is a junior figure, moving through the chamber’s power structure at the speed of a mastodon tapped in a glacier.” ~The Washington Post 7/13/14

A loyal party follower and self-described moderate Democrat, Begich gave Obama 105 of his 107 Senate votes. He voted to increase the debt limit 7 times, voted for the failed $831 billion stimulus plan, voted for a national energy tax known as Cap and Trade, and although he claims to be against EPA overregulation, Senator Begich voted against reining in the EPA’s power.

Although he claims credit for many accomplishments, it turns out that Senator Begich has stretched the truth a bit on those claims. He has taken credit for getting Veterans facilities built, but it was Senator Ted Stevens and others who got the ball rolling on them. He has claimed credit for bills sponsored by Alaska Senator Murkowski, on which he was merely a signer. He promised he’d fight Obama and open ANWR for drilling. ANWR is still closed. He has actually been chastised by Alaska Congressman Don Young, who said, “I don’t appreciate the ads being run on his (Begich’s) behalf. The road (into the National Petroleum Reserve)? Nah. Dena’ina Center? Nah. Merrill field? I don’t think so. Don’t take credit for something you didn’t do.”

From 1988-98 Mark Begich served on the Anchorage Assembly. During this period, his friend, Anchorage Police Department Employees Association President, Rob Heun convinced the general membership to approve the purchase of an entire building for a union meeting hall. Many felt this was an extravagance since the APDEA union executive board met only once a month. The realtor, Anchorage Assemblyman Mark Begich, reportedly received at least 50K in fees for the $375,000 sale. Additional remodeling costs, reportedly $675,000, went to Begich associate, Joe Murdy (now deceased). Many APDEA members, however, felt that the improvements, including installation of inexpensive indoor-outdoor carpeting, painting walls and adding red outside vinyl window awnings did not justify an expenditure of over two-thirds of a million dollars…especially since the general assembly meeting room was left with a hole to the outside in the south wall where an exhaust fan had been removed. In the end, it cost over a million dollars for this chilly and rarely used building.

In 2003 Begich was elected to a term as Mayor of Anchorage. But that hadn’t ended all that well. During Mark Begich’s tenure as mayor, he increased spending, proposed higher fees and fines, and proposed cuts to city services. Just before leaving office and without consulting the Anchorage Assembly, Begich agreed to generous labor contracts that the city couldn’t afford. In 2008, the Anchorage Assembly voted unanimously to audit those labor contracts that Begich made without their approval. The contracts furthered the financial mess Begich created as mayor while he headed to Washington, DC. In 2009, an independent review found Begich provided inaccurate information and never confirmed Anchorage had the funding for these new contracts.

During the economic downturn in 2008, Begich painted a rosy picture of Anchorage’s economic status, but his finance team worried as some city departments were over spending their calendar-year budgets. The estimated budget shortfall was never disclosed to Assembly members and Begich continued to downplay the problem. As Mayor, Begich increased city spending by more than $130 million, an increase of nearly 50%, and left the city more than $17 million in debt. 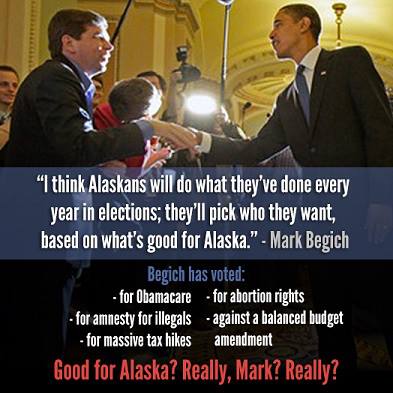