Reminder: President Obama is Our EMPLOYEE, Not Emperor or God 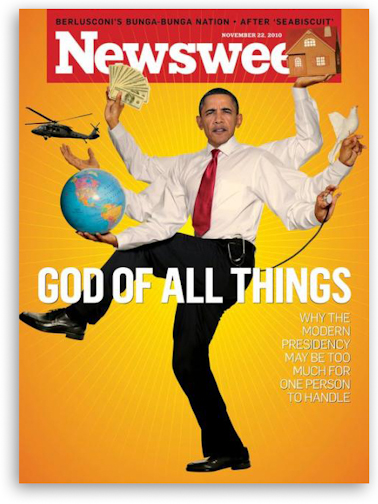 Growing up in the 1960s and 1970s, I saw first hand how liberals spoke “truth to power.” Domestic terrorism was in full swing as left wing nasties like Barack Obama’s buddy Bill Ayers and the Black Panthers, just to name a few, bombed buildings, murdered innocents, and started riots. It was an era marked by nationwide violence as those who weren’t happy took to the streets. Cities were literally on fire as rioters burned and looted. It was all good though, as these people were doing it “for the cause.”

When George W Bush was president, we saw less violence, but were told on a daily basis by the left that dissent was “patriotic” and that we should shut up already. The left not only applauded when someone threw a shoe at Bush in protest, they bestowed awards on two Hollywood filmmakers who made “fantasy movies” [including one that used actual archival footage of President Bush] that showed the President being brutally assassinated. That was all good too.

A funny thing has happened now that Barack Obama is our president though. Now any criticism whatsoever, no matter how valid, is met with cries of racism, or worse. According to the democrats, we must never criticize our “Dear Leader” …. ever. Those who dare criticize President Obama are immediately targeted by the democrat party and their media partners for destruction.

As Americans we’ve come to understand just how corrupt our media is, and how in the bag they are for any and all liberals, most especially Obama, but we’ve gone from mere political propaganda to outright worship of the man.

Case in point, look at the made up controversy over the speech Dr. Ben Carson made at the recent National Prayer Breakfast:

Dr. Carson is an impressive human being. His career is phenomenal as is his skill as a pediatric surgeon. At age 33, he was named Director of Pediatric Neurosurgery making him the youngest person ever to head a major division at John Hopkins Hospital. In 2008 Dr Carson was awarded the Presidential Medal of Freedom, the highest honor given to a civilian, by President George W Bush. It’s only one of many awards he’s been given for his pioneering work.

As I looked at the various news programs discussing Dr Carson’s speech, and how obviously uncomfortable Obama was sitting there having to take his lumps, the left wing meme started to emerge. Rather than ripping this obviously astute man apart, democrats decided to proclaim that the good doctor was a “disgrace” and “rude” for speaking the truth, and doing it to Obama’s face.

Bob Beckel, a hack who spews all of the lefty talking points like a well oiled machine, was all in a huff on Fox News’ The Five, and among other things, called Dr Carson a “disgrace.” I often wonder if Beckel even believes half the nonsense that comes out of his mouth, but if there was any disgraceful behavior going on, it came from Bob, not Dr Carson.

Not to be left out, Kirsten Powers added her two cents, calling Dr Carson “rude” via Twitter:

Just seeing the footage of Ben Carson at National Prayer Bfast on The Five. That was incredibly rude to the president.

As one can imagine, Powers was hammered by those replying to that tweet. Many asked Powers exactly how Dr Carson was “rude” while others brought up several times that Obama actually was rude:

@kirstenpowers10 C'mon, b/c POTUS is there one ought not opine? Potus lives by that rule himself (Invites Ryan to diss) & it's not a bad one

and completely out of line:

@kirstenpowers10 As was the president's calling out the SCOTUS at the State of the Union.

@kirstenpowers10 What did he say that "partisan" or rude? Disagreeing with Obama's views is allowed, even at the National Prayer Breakfast.

Though many asked what she was thinking, Powers had only one response:

@JBrenn It was the NATIONAL PRAYER BREAKFAST

Not sure why President Obama would be exempt from criticism at the National Prayer Breakfast, but such is the way the liberal mind works. Of course, as Obama has literally declared war on religious freedom, by forcing those who’s religion forbids things like abortion to pay for it anyhow, what better place to bring up the evils of ObamaCare.

Powers doesn’t get that:

Also why is someone talking about health care reform at the National Prayer Breakfast?

In all fairness, Powers isn’t nearly as big of a hack as Beckel, and has been known to question the motives of her fellow lefties, but when she does shill for them, she goes all in, and can be plenty hacky.

In case you missed it, Sean Hannity had a great talk with Dr Carson that readers will enjoy:

All of this whining from the left about Dr Carson is ridiculous and aggravating, but to be expected, as the left demonizes anyone who dare question “Dear Leader” Obama, but what we’ve seen from Hollywood is far more disturbing.

Recently Chris Rock said President Obama is our “boss and that he and the First Lady are the “the mom and the dad of the country” and that they should be listened to as parental figures.

I wonder if Rock would have the same notion if it were President Sarah Palin and First Gentleman Todd Palin living in the White House.

Somehow I think not!

During the 2012 presidential campaign Jaime Foxx proclaimed that President Obama was “God” and our “Lord and Savior.” 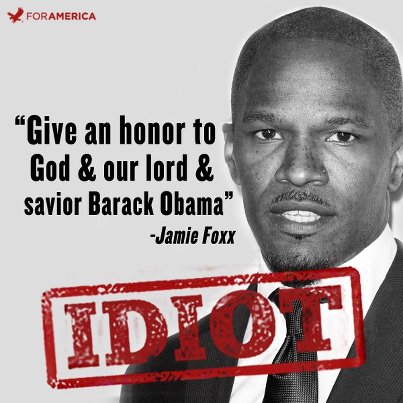 How does one even respond to that level of stupidity?

Back in September of 2012 actress Ellen Barkin tweeted about voting for Obama, which as you can imagine, saw many respond as Tim Allen does here:

@EllenBarkin how can he help the jobless when he's the damn reason they don't have freaking jobs to start with..

Barkin goes on to say that basically, we all belong to Obama:

@linseyajones Right now he is the President of our country.He is our leader & we are his people.

Again, I wonder if loons like Foxx and Barkin would feel the same if it were President Palin in office, rather than President Obama. I seriously doubt it.

Of course, Conservatives would never look to our elected officials as gods, or kings. Sure, we have politicians we admire, and a select few that we actually trust, though it’s an ever shrinking number on both accounts, but that doesn’t make any of them our “lord and savior.”

This trend we are seeing is incredibly disturbing. The very notion that people would advocate turning their lives, their destinies …. their futures, and the futures of their descendants …. over to a politician, any politician, is ludicrous.

Michelle Malkin skewers these loons in this Fox News interview:

Fact is, Barack Obama is, above all else, our EMPLOYEE. He is a public servant, just as is the local cop on the beat, or the folks who pick up our garbage twice a week. Yeah, he’s paid better, and certainly the Office of the President carries some prestige and power, but the president is still nothing more than a paid employee, and accountable to all of us who pay his salary.

Sadly, Obama, as well as almost every other public official in the country, have forgotten who they work for and who the boss is. This over the top worship of many of these politicians doesn’t help matters either.

As Americans, it’s not just our God given right to question our leaders and their actions, it’s our duty. The only way we can truly ensure our Liberty and Freedom is to watch EVERY politician like a hawk watches chickens. We must hold them all accountable. We must keep pressure on them daily. We must be relentless in the pursuit of government accountability. We cannot slack up, not for a single minute.

The Office of the President demands a certain amount of respect, for sure, even when the occupant of that office is a communist devil hellbent on destroying the American way of life as we know it, but questioning the president is not a sign of rudeness or disrespect. Indeed it’s our duty as Americans to question everything the president does and hold him accountable for his actions.

As Americans, many of us have neglected our duty. Busy with life in general, we have failed to hold all of our public officials accountable. Now we all sit around bitching about a debt so unsustainable the entire nation is on the verge of total collapse, and wonder how we got to the point that corruption at all levels of government is at unprecedented levels.

Shame on the left for trying to elevate Obama to “god” status, but shame on the rest of us as well for not making the point to Obama, and ALL politicians that they work for us, not the other way around. 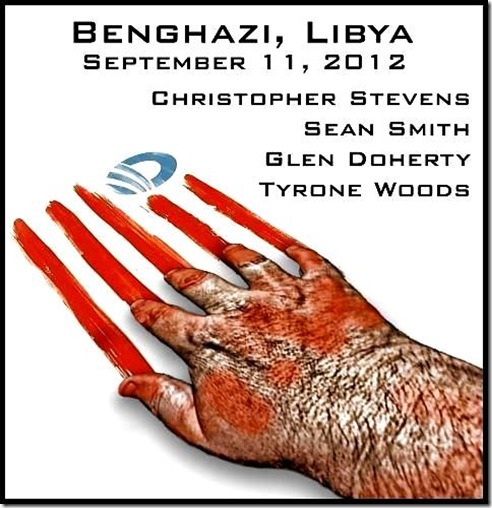 Bob Beckel admits that Barack Obama and the regime’s activities during and after the attack on Benghazi are treasonous.

Greg Gutfeld slams Obama, and notes that instead of talking to the people about this horrific attack, he’s partying over at MTV. Greg’s parting shot:

Obama doesn’t have feet of clay, clay has feet of Obama