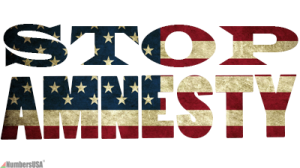 I am going to continue to dedicate time to a topic no one is talking about enough. Time is running out.  We need to move.  I don’t sense the same urgency when the Senate Bill was being passed. Maybe there is apathy because we have a Republican majority in the Congress, but that should not be taken for granted. Many of these Republicans are being tempted left and right to vote for Amnesty. Too few have said NO. Too many, YES.

Please support my effort by passing this video along, going on Twitter and making it trend by pressing #NoAmnesty, contacting your Representatives, and not stopping until they are reached. I have contacted more than one who is not in my district.  YOU cannot be too zealous!  Too much is at stake. Thank you.

Wait a minute,… hold the phone! I thought you were a Nazi (or something worse) if you asked people to “show their papers.” And yet….here we are.

This from Kalamazoo, Michigan’s Kalamazoo News:

The White House appears to be laying the groundwork for President Barack Obama to shake the hand of each senior at Kalamazoo Central High School’s commencement ceremony next month.

Seniors are being asked to provide their birthdates, Social Security numbers and citizen status to the Secret Service so background checks could be performed. Such a check is required for anyone who gets within an arm’s length of the president, students were told at their senior breakfast Friday.

Of the fact that the White House is requesting information on all the graduating seniors, K-Central Principal Von Washingon Jr. told the students, “I’ll let you figure out what that means,” said senior Simon Boehme, who was at the breakfast.

Look, in all fairness, it’s the Secret Service’s job to protect the President, and no one wants any harm to come to a President….any President. But it’s quite interesting that while Obama and his minions have been on an apology tour, with the latest disgrace being over Arizona’s tough immigration policies, that mirror the federal standards, this comes out.

As we have written here and here, the Obama regime has trashed Arizona while apologizing to China. Just today, Obama dumped on Arizona, from the White House lawn, and stood there, like the impotent fool he is, while Mexico’s President Calderon trashed Arizona. This was a truly disgusting display of hatred toward America, not only from Calderon but from our own Barack Obama.

I guess it’s “protection from dangerous illegals for me, but not for thee.”

This truly a sad time in American history. Never have we had such a hypocritical, ant-American government in place.

As an American, I stand with Arizona, and the Rule of Law, in all of this. We must stop illegal immigration. We must secure our borders. Barack Obama is not the only one who deserves to be protected from dangerous illegal aliens!