In Arizona Immigration Ruling, Judge Bolton Has No Jurisdiction, And Other Problems For The Obama Regime. UPDATED 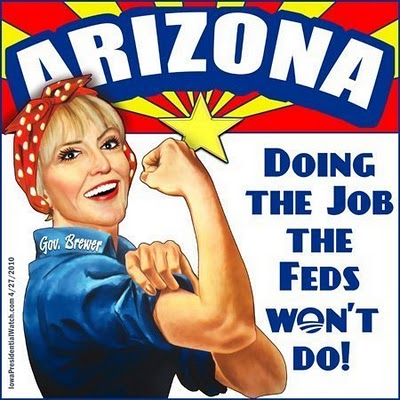 Scroll down for update at bottom.

Not only is the Obama regime refusing to perform this specific Constitutional duty – it seeks to prohibit the Sovereign STATE of Arizona from defending itself! This lawlessness on the part of the Obama regime is unmatched in the history of Our Country.
~Publius Huldah

From Canada Free Press, a bit of information that should change the entire debate over Arizona’s attempt to protect itself from the invasion from Mexico, and the violent crime it brings. It also brings up many questions that absolutely need answers. (Like why didn’t we figure this out first!)

Look, we all know that Obama, his corrupt Attorney General Eric Holder, and other regime officials never bothered to read Arizona SB 1070 before declaring it “racist” and “unconstitutional.” Of course, the law simply mirrors federal law, only less severe. Other states like California and Florida have similar, but tougher laws. With that said, we know that both Obama and Holder have little more constitutional knowledge past knowing that such a document allegedly exists. I doubt either has read the Constitution fully, or even cares.

With that said, one wonders how Jan Brewer’s defense team missed this one. The Constitution is very clear on this. No wiggle room whatsoever.

Publius Huldah is a retired lawyer who lives in Tennessee. She writes on the U.S. Constitution and posts her papers at publiushuldah.wordpress.com She has this to say about the situation in Arizona:

Does anyone read the U.S. Constitution these days? American lawyers don’t read it. Federal Judge Susan R. Bolton apparently has never read it. Same goes for our illustrious Attorney General Eric Holder. But this lawyer has read it and she is going to show you something in Our Constitution which is as plain as the nose on your face.

“Original” jurisdiction means the power to conduct the “trial” of the case (as opposed to hearing an appeal from the judgment of a lower court). You all know quite well what a “trial” is – you see them all the time on TV shows: Perry Mason, Boston Legal, The Good Wife, etc. Witnesses testify and are cross-examined, etc.

The style of the Arizona case shows quite clearly that the named defendants are:

Judge Susan R. Bolton has no more authority to preside over this case than do you

See where it says, “State of Arizona”? And “Janice K. Brewer, Governor of the State of Arizona, in her official Capacity”? THAT (plus Art. III, Sec. 2, clause 2) is what gives the US Supreme Court “original Jurisdiction”, i.e., jurisdiction to conduct the trial of this case. THAT is what strips the federal district court of any jurisdiction whatsoever to hear this case. Judge Susan R. Bolton has no more authority to preside over this case than do you (unless you are a US Supreme Court justice).

…Let us now examine in what manner the judicial authority is to be distributed between the supreme and the inferior courts of the Union. The Supreme Court is to be invested with original jurisdiction, only “in cases affecting ambassadors, other public ministers, and consuls, and those in which A STATE shall be a party.”

Public ministers of every class are the immediate representatives of their sovereigns. All questions in which they are concerned are so directly connected with the public peace, that, as well for the preservation of this, as out of respect to the sovereignties they represent, it is both expedient and proper that such questions should be submitted in the first instance to the highest judicatory of the nation.

Though consuls have not in strictness a diplomatic character, yet as they are the public agents of the nations to which they belong, the same observation is in a great measure applicable to them. In cases in which a State might happen to be a party, it would ill suit its dignity to be turned over to an inferior tribunal….[boldface added, caps in original]

Yet Attorney General Eric Holder filed the case in a court which is specifically stripped of jurisdiction to hear it!

So! Counsel for the State of Arizona should consider:

1. File a Petition for Removal before federal district court Judge Susan R. Bolton demanding that the case be removed to the Supreme Court on the ground that under Art. III, Sec. 2, clause 2, US Constitution, only the Supreme Court has jurisdiction to conduct the trial of this case.

A Petition for Writ of Mandamus is an old common-law “extraordinary writ”: It asks a court to ORDER a lower court or other public official to something which it is its duty to do. In Kerr v. US District Court for Northern District of California (1976), the Supreme Court said, respecting the propriety of issuing writs of mandamus:

….the fact still remains that “only exceptional circumstances amounting to a judicial ‘usurpation of power’ will justify the invocation of this extraordinary remedy.”…(para 13)

When a federal district court judge presides over a case which the Constitution specifically prohibits her from hearing, and even issues a ruling enjoining the enforcement of a State Law, then that federal district court judge usurps power. She is specifically stripped – by Art. III, Sec. 2, clause 2 – of jurisdiction to preside over the case against the STATE of Arizona and against THE GOVERNOR of the STATE of Arizona.

For procedures for filing the Petition for Writ of Mandamus, see Supreme Court Rule 20.

Article IV, Sec. 4, requires the federal government to protect each of the States against invasion.Not only is the Obama regime refusing to perform this specific Constitutional duty – it seeks to prohibit the Sovereign STATE of Arizona from defending itself! This lawlessness on the part of the Obama regime is unmatched in the history of Our Country.

This is quite the pickle Holder and Dear Leader find themselves in. This is pretty cut and dried. Only the Supreme Court has the jurisdiction to rule on SB 1070, because the Obama regime is suing the sovereign state of Arizona. This would seemingly void everything activist judge, Susan Bolton, has done, including staying parts of the Arizona law.

This isn’t the only problem the Obama regime has though. Chris Battle of U.S. News And World Report offers up this:

Back in 1996 (when fanny packs were still cool, in some circles) it was time to get tough on immigration, and an interesting little law was passed. Congress deemed it appropriate for state and local law enforcement to enforce immigration law. In the inscrutable manners of Washington (where all legislation seems to be named with insufferably cute acronyms or indecipherable legislative codes that read like security passwords), this law came to be known as 287g.

Want to know what 287g says? Well, just read the law in Arizona. Yes, that law. The one causing protests in the streets of Phoenix, hysteria on cable talk shows and confusion in the courts. The one that empowers state and local law enforcement to enforce immigration law.

The federal law that has been on the books for more than decade … empowers state and local law enforcement to impose immigration law. According to U.S. Immigration and Customs Enforcement, more than 60 jurisdictions in states across the country have taken advantage of this law.

Florida, Virginia, Oklahoma, Ohio, New Hampshire, California, and even Massachusetts are among the states in which local police are enforcing immigration law.

There is one caveat to the law. Homeland Security must approve each state, but with these states, and more, already having the blessing, it would be political suicide for the Obama regime, and the entire Marxist-democrat party for Arizona to be denied.

Anyway you slice it, it looks like Obama, as usual, has handed his fellow travelers another massive headache by putting his radical ideology over common sense.

It will be interesting to see how all of this plays out.

An alert reader points out that Congress indeed granted district courts jurisdiction in these cases, so it seems the reporting from Publius Huldah is flawed.

Except as otherwise provided by Act of Congress, the district courts shall have original jurisdiction of all civil actions, suits or proceedings commenced by the United States, or by any agency or officer thereof expressly authorized to sue by Act of Congress.

With that said, there is still the problem with the 1996 law that gives the states the authority to enforce federal immigration law. There are already members of Arizona law enforcement who have went through the proper approval process.

This is still a landmine for the Obama regime.

We do however, apologize for any confusion.