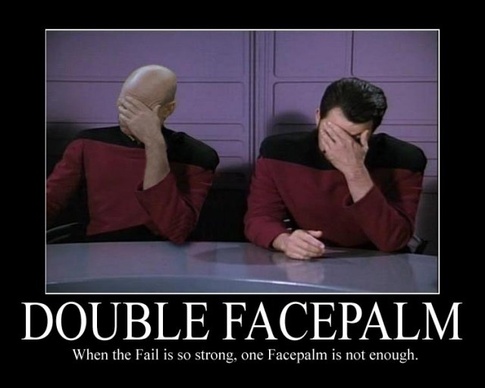 Even fools are thought wise if they keep silent, and discerning if they hold their tongues.

It is better to remain silent and be thought a fool than to open one’s mouth and remove all doubt.

Ever since Todd Akin opened his mouth and started spinning tales of the Magical Uterus© his support has cratered among everyone but democrats. [who reportedly spent north of $1.5 million making sure he was their opposition]

First it was a Rasmussen poll showing Akin had dropped from being 10 points ahead of socialist Claire McCaskill, to 10 points behind. This prompted Jim Hoft over at Gateway Pundit to write:

Thank you Todd Akin for bringing down the Republican Party with you.

Cook Political Report has declared Todd Akin “unelectable ” and moved the 2012 U.S. senate race in Missouri to a projected Democrat win. Before Todd Akin’s rape comment it was predicted to be a Republican victory.

Read all of the sad story here.

Doug Brady over at Conservatives4Palin reports that Akin had the cojones to spin this 20 point drop in the polls as [Are you waiting for this?] a good thing!

Upon hearing this Stacy Drake said:

Well now things have gotten worse. A poll from the Saint Louis Post-Dispatch shows that even Akin’s supporters want him gone, by a margin of 50-34. The only support he has is among democrats, who most certainly aren’t going to vote for him.

From the Washington Examiner:

Mitt Romney, Paul Ryan and the GOP establishment aren’t the only ones who want Rep. Todd Akin out of the Missouri Senate race due to his controversial “legitimate rape” comments. A Missouri poll shows that even his best supporters, by a whopping 17 points, want him to drop out. Only Democrats want him to stay in the race.

According to a new St. Louis Post-Dispatch/News 4 poll, self-described Akin supporters want him to quit, 50 to 34 percent. His image in the new poll is abysmal, with just 17 percent viewing him favorably and 56 unfavorably.

And the bottom line on his chances of beating Democratic Sen. Claire McCaskill, who he led comfortably before the scandal by five points is just as bad. He is currently nine points behind McCaskill, 50 percent to 41 percent.

The poll echoes a similar Rasmussen Report released Friday that showed a similar shift in the race that many analysts said was Akin’s to win.

The poll reinforces efforts to convince Akin to drop out of the race. He has until September 25 to get his name off the ballot. Akin on Friday dismayed the GOP establishment by announce he was staying in the race. He suggested that he was going to run against the establishment, but even allies like conservative talk show hosts Mark Levin and Sean Hannity, as well as Romney and Ryan, have called on him to step down.

Anti-Akin forces Saturday were pointing to the fact that even Akin’s own supporters want him out of the race and were hopeful that Akin would act on that finding.
An Akin associate, however, said that his campaign expects the furor to die down and that with the help of some new ads he will stage a comeback. And a key Washington conservative activist told Secrets that some conservatives are rallying around Akin and are upset that he’s being left out to dry by the GOP presidential ticket.

Other details from the poll:

— Women are running from him. While they were previously split between Akin and McCaskill, women now oppose him by almost 20 percent, 55 percent against to 37 percent for.

— Republicans want him to withdraw, 47 percent to 37 percent.

— Independents want him to withdraw, 57 percent to 25 percent.

— Undecided voters, by a 67 percent to 16 percent margin, want him to withdraw.

— Only Democrats support his candidacy. Some 47 percent want him to stay in the race, while 37 percent said he should withdraw.

You know who is REALLY angry about the Rasmussen polling and other developments? The democrats! No doubt afraid someone will run a write-in campaign to stop both Akin and McCaskill. As WeaselZippers notes:

Dems Outraged Over New Rasmussen Poll Showing Akin Down 10 Points To McCaskill, Say Pollster Is A “Tool Of The Republican Establishment”…

Outraged their candidate is showing a double-digit lead? Has to be a first.

Todd Akin is a fool, and his arrogance and ego may very well cost us the Senate. If we don’t regain control of the Senate, so we can roll back many of the evil programs the Obama regime has in place, America, as we know it, is finished.

I’ll join Hoft in saying: Thank you Todd Akin. Thank you for helping destroy a nation.

I’ve replaced the original videos with one of higher quality that includes footage from Conservatives4Palin’s Steve Flesher, courtesy SarahNet.

Make sure you read Whitney’s excellent article on the parallels between Sarah Palin and Sarah Steelman.

The Parallels of Sarah Palin and Sarah Steelman

Governor Palin appeared at a campaign rally for Missouri Senatorial candidate Sarah Steelman tonight. A state representative from Missouri introduced Steelman noting her intentions to change Washington if elected., but he also noted Steelman’s record. One aspect of her record was particularly compelling. As state treasurer, Sarah Steelman started the first terror-free investment fund in the country. Her campaign website notes (emphasis added):

She served as State Treasurer of Missouri from 2004 until 2008. As Missouri Treasurer Steelman was responsible for the management of more than $19 billion in Missouri’s annual revenue and managed the investment of over $3 billion in long- and short-term investments in the state’s portfolio. She started the first terror-free investment fund in the nation, which ensured that no taxpayer dollars were invested in terrorist sponsoring countries. Many other states have followed her lead in enacting similar policies.

Fiscal prudence is not only about how much money is spent or how it  is specifically budgeted, but about where it is invested. Sarah Palin and Sarah Steelman share that important understanding when it comes to where state monies are invested. There is a fiscal responsibility to invest other people’s money wisely, but there is also a moral responsibility to make sure it is invested ethically. As Governor Palin noted during the 2008 Vice Presidential debate regarding Alaskan dollars that were invested in Sudan:

When I and others in the legislature found out we had some millions of dollars in Sudan, we called for divestment through legislation of those dollars to make sure we weren’t doing anything that would be seen as condoning the activities there in Darfur. That legislation hasn’t passed yet but it needs to because all of us, as individuals, and as humanitarians and as elected officials should do all we can to end those atrocities in that region of the world.

The thousands of Governor Palin’s emails the media requested only further confirmed this desire to divest money from a country engaged in genocide. Whether it’s in the Senate or the state house, people are looking for leaders who not only are conservative, but who are reformers who aren’t going to turn a blind eye to the immoral mismanagement of money. Steelman and Palin don’t solely share a first name; they share a commitment to a making sure, as Steelman says, “the status quo has got to go” by reforming the way that government operates.