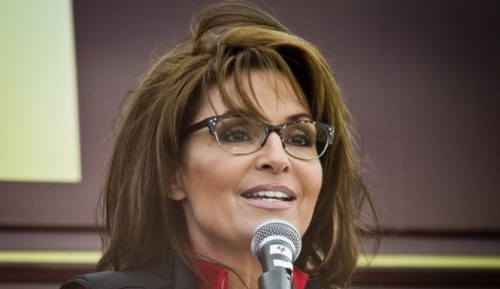 Before Sarah Palin was Governor of Alaska [and after she was term limited out as Mayor of Wasilla] she was Chairman of the Alaska Oil and Gas Conservation Commission. One of the most powerful jobs in Alaska, and the oil and gas industry as a whole.

Once elected Governor, Palin was then elected Chairman of the nation’s Interstate Oil and Gas Compact Commission, which comprises all of the oil and gas producing states in America. The National Governors Association, comprised of Governors from all 50 states elected Palin as Chairman of their Natural Resources Commission.

Palin is a recognized expert on oil and gas production and has been involved in exploration and developing best practices and ethics for the industry.

She is quite famous for taking on Big Oil, numerous times. So much so, industry insiders wrote the best seller Sarah Takes On Big Oil which is still available through Amazon.

Governor Palin headlined the Decision’s Maker’s Breakfast at the North American Prospect Expo in Houston on Thursday. She was greeted by a standing ovation and left to one as well. “It’s always a pleasure to be back in Alaska’s sister state Texas.” Palin told the excited audience.

When asked, she still isn’t ruling out a presidential run in 2016. Many in the media are ridiculing her for not committing, never mind most so-called hopefuls haven’t either. Here’s the thing. Governor Palin still has her TV show on The Sportsman Channel and new episodes, already filmed, are still airing. Once she declares, The Sportsman Channel will be forced to discontinue airing episodes. There are only a handful of episodes left that haven’t aired. I have no idea whether Palin will, or will not run. I do know there is absolutely no hurry for her to declare, especially when basically no one else has, yet. We all know the rules seem to be different for Governor Palin, but come on!

We have some excepts from Governor Palin’s speech, sourced from several reports. Her speech included a moderated question and answer session. [Which will be reflected by highlighting questions asked]

“Energy is my baby. I absolutely love it. It’s the theme that I miss most about my governing responsibilities. Being able to help spur investment and exploration and development and, you know, responsibly extracting that most valuable resource we have in Alaska and so many other places. And being able to feed and fuel our great nation with what God has created for man’s responsible use.”

“My husband Todd started off with BP on the North Slope of Alaska. We raised our kids with that North Slope lifestyle. Thank you so much for paying my bills for many years.”

About Obama asking Congress to designate parts of the Arctic National Wildlife Refuge in Alaska as a wilderness area, although he will look into opening the Atlantic coast to oil and gas exploration: “That’s a bogus exchange. The Atlantic potential out there has already been tried. … Picture a football field — that’s ANWR — and a postage stamp. That’s the size of what we need to explore.”

Not to mention the fact offshore drilling has major environmental risks not found when drilling on land! ~ Gary

Concerning slumping oil prices and job cuts: “Now is the time to start planning for more drilling, for more production. With downturned prices like this, it gives y’all a chance to sort of catch a breath, right, and plan for the future. We can look at it as the glass half empty or half full. Of course, the half empty part is the job losses. From a humanitarian standpoint, it’s sad to see people threatened with their employment. But, on the other hand, these low oil prices can actually really help spur our economy and, ultimately, help the industry.”

“Right now low oil prices are helping to spur our economy, though they are hurting the oil and gas industry. Now is the time to plan for more drilling and more production. It’s a time to catch your breath and plan for the future.”

Can government do anything to help the industry at this time? “Usually government just gets in the way, and is so much of the problem in our economy. But right now government can spur more production by lifting the export ban.”

“But instead of common sense moves like that, the administration is hurting the industry by blocking Keystone XL, by pursuing land grab in Alaska. By enabling an EPA guilty of vast regulatory overreach. The punative aspect of it is to really stick it to the American people.”

“The president is not for American energy independence. If he were he wouldn’t be trying to lock up the Alaska National Wildlife Refuge. That’s 20 million more acres he wants to lock up from development.”

“All we need to explore and develop ANWR is a 2,000 acre swath. Alaska is 400 million acres when you consider our water and land. A postage stamp in the middle of a football field. That’s all the land we need to develop.”

As for the Keystone XL pipline: “It’s a no-brainer. It’s basic infrastructure. We have millions of mile of pipe streaming across this country. It’s the safest way to transport friendly fuel. It’s a shame [President Obama] has taken off the possibilities for America and for Canada to transport this fuel. It will get to market somehow.”

Currently the oil in question is being transported by rail. There have been numerous spills due to derailments. NOT having the Keystone Pipeline is an environmental disaster. With the pipelines, spills are virtually none existent. Conspiracy theories have sprouted due to the fact the railroad used is owned by one of Obama’s top cronies, Warren Buffet. In public Buffet has said he is for the pipeline, even though it would hurt his bottom line. ~ Gary

“The administration is not understanding the inherent link between energy and security and energy and prosperity. He’s rewarding the environmentalists who are extreme in saying there would be environmental harm in developing ANWR. They worry about the impact on the moose and caribou. Well we’ve had the Trans-Alaska Pipeline for decades, and that pipeline has not been adverse at all.”

“On the contrary, “the animals like the warmth that the pipeline gives off. “The animals mate under the pipeline. I haven’t actually seen it but that’s what I’m told. If oil and gas development is risky to wildlife, if it is to hurt one caribou, then that one caribou should take one for the team and allow the rest of the country to benefit.”

Governor Sarah Palin and her team in front of the Trans-Alaska pipeline.

“Speaker John Boehner, Congresswoman Michelle Bachmann, they took the time to fly up to Alaska and actually visit ANWR. The president has never been up there. Politicians need to take the time to see for themselves what they’re voting on.”

“I can’t wait for 2016. That election I can see from my house. I hope for a GOP candidate who understands energy and understands infrastructure.”

“Hillary Clinton will be the Democrat candidate because she has the money. After her, it’s a shallow bench.”

Is there any chance a dark horse could emerge to challenge her? “Not really, because of the money. Hillary Clinton will seize the opportunity to collect those funds. Hillary is it.”

As for Vice President Joe Biden? “He’s been in politics long enough to have voted against the Trans-Alaska pipeline.”

“Common sense conservatives — we’re going to have our hands full.”

Is Sarah Palin considering a run? “I’m so sorry you asked that. It’s just too early. But a lot can change.”

Can we win? “I don’t underestimate the wisdom of the people. Enough is enough for this hopey changey stuff that didn’t work.” America needs common sense. America needs to reclaim exceptionalism.”

“Candidate Obama promised to fundamentally transform America. But we don’t need that. We need to restore what’s great about America.”

On the topic of international relations:

“It’s been said that Saudi Arabia has recently been trying to seek back bigger market share. To penalize the shale players. And that the U.S. is going along with it to extract penalties against Putin and Iran.”

“But a side effect is that the U.S. is becoming more of the global oil swing player. The Saudis are basically allowing America to take over the decide on production levels and the market.”

“With so much of the world oil supply dominated by OPEC and Saudi Arabia, it’s just such a shame that we are so enormously under the influence of foreign countries.”

“We want to get out from under that. That’s why I support things like Keystone and fracking and horizontal drilling.”

“America should have the ultimate goal of being really energy independent, instead of going over to Saudi Arabia and bowing before the king. We don’t want to have to rely on what’s going on over there.”

“It’s tough to imagine that the Middle East can get even worse than it is, when you consider the evil. The terrorists spreading out across the globe. America losing its position of strength.”

“But it will get worse.”

“The Saudis will try to get rid of competition, which includes America.”

Russia will be a problem as well. “Putin is like a wounded bear. Very unpredictable. He still has the KGB in him. He bullies his neighbors.”

“There’s reports out there that billionaire Russians out there are helping to fund some U.S. environmental groups that oppose fracking and basic developments here so that the public will want to ratchet down production. That would bolster the position of the Saudis. The Russians. These dollars coming into environmental groups. I would like to find out whether that’s true.”

“America has to stand up to all this. It’s a psychological, emotional type thing. Our young people are losing the sense of what it means to be America. The Constitution, freedoms. What we will do on our lands. How we will responsibly develop God-given resources for our use. The founding fathers created a blueprint to allow us to be exceptional. We are exceptional.”

“Freedom isn’t free. You have to fight for it. That’s why I support the U.S. military. They are America’s true heroes.”

Thanks to Michelle McCormick for her hard work and contributions.