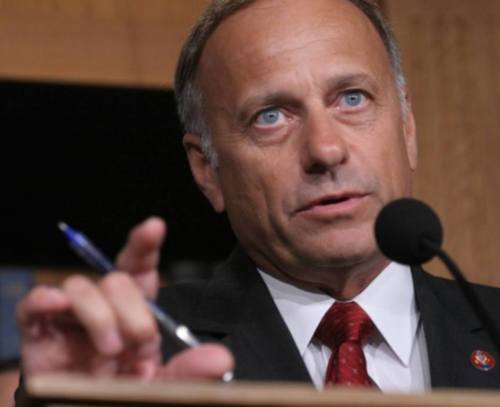 The House delayed its August recess to debate the bill.  Please check three previous articles: 1 2 3. Vote results are as follows:

House Republicans found the votes late Friday night to pass a $694 million appropriations bill aimed at stemming the tide of the child migrant surge at the U.S-Mexico border.

It passed largely along party lines, 223-189, freeing Republicans to go home for the August recess able to tell constituents they took action to address the crisis — unlike the Senate, which was unable to pass its own border funding bill Thursday but left town anyway. Only a single Democrat, Rep. Henry Cuellar of Texas, voted for the package.

Republicans had tried to appease their restive caucus with a separate vote to end the Obama administration’s Deferred Action for Childhood Arrivals program, which grants stays of deportation to young undocumented immigrations brought into the country illegally by their parents.

They at last sealed the deal on Friday by making the DACA bill more stringent while broadening the changes to the 2008 trafficking law. The changes included allowing minors to remain in the custody of immigration enforcement officials as they await deportation proceedings, and on language regarding government investigations into whether the adults taking custody of those minors paid criminal smugglers for their passage.

One of leadership’s harshest critics, Rep. Steve King of Iowa, told CQ Roll Call the new package was “like I ordered if off the menu.” Read more here

If you listen bilingually, some Democrats are delivering sharper critiques of #GOP #border bills in Spanish http://t.co/sn29N2SDkm

(Will update when Ted Cruz has a statement. I still think the GOPe is aiding illegals. Let’s see what he has to say.) Emma’s Update on C-SPAN

The GOPe Is Pushing Amnesty Because They Are Just A Bunch of Wimps!

If you have read some of my articles, you will have seen parts of this before, but the word needs to get out, and I am hoping with a video we will keep the conversation alive through a different venue. Our GOP is pandering for votes behind our backs.  If they were proud of what they were doing, they would be talking about it every day or posting it all over their Facebook walls. It’s bad enough that Fox News continues to ignore the subject. Amnesty is the GOP’s ObamaCare and needs to be part of the conversation.  I will have some updates on this, but good news is hard to find because Rino work in sneaky ways.

One of the issues that bothered me was the Steve King accusations.  Steve King was talking about having Town Halls to talk about Amnesty, and the subject has just about disappeared. Luckily, everything Cantor and Boehner threw at him (smears) didn’t stick. He was right about young illegals smuggling drugs, but that didn’t stop Boehner from threatening to remove him from committees. These are delays and setbacks put in our way to stop us, by none other than our frenemy Boehner who will stop at nothing to antagonize Conservatives in the House.  Paul Ryan has also mentioned at his town meeting in Racine which included illegals, that the vote might be delayed until October, which is fine with me, as long as there is transparency in the process.

Dear Governor Palin, Please Help Us Stop Amnesty By Calling Us To Action! 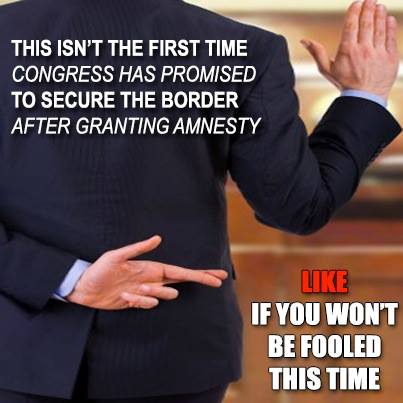 I have never asked you for anything, but I am asking you to please lead the charge in helping us stop the Amnesty Bill from passing in the House.

RUBIO is R.I.P. for me, so is McCain and the rest of the Gang of 8. Their careers mean nothing. Our country does. We’re stuck cleaning the damage they did by passing Amnesty in the Senate. As if that was not enough, they have the gall  to continue working against us by targeting House Republicans to pass it there (see link below).  They are disrespecting Americans and disregarding the Rule of Law.

This AMNESTY bill is beatable, but ACTIVISM is needed.  We can target our representatives the way big business and the Gang of 8 have targeted them.

Focus is the key to success. I’m here to focus, not squander time. Based on all that I have read so far, if Amnesty passes, it will create a permanent progressive majority, and add an estimated 30 million new Democratic voters after all is said and done. I am stunned by those numbers, and the fact that not one election has garnered the Hispanic vote for Republicans, so why do Republicans vote for it?

I believe our Representatives need to hear and know the facts.  I’ve quoted these stats several times – from a Pew Research Poll Mark Levin read on his show: http://wwwthefollowup.blogspot.  Numbers don’t lie. The message is short, quick to read and easy to pass along to our Representatives who seem to be clueless and poorly informed on the matter. Pompous and pretentious Eric Cantor is on a “Become America” tour to educate us on Immigration Reform. I believe we need to remind Cantor, Boehner, and Ryan that their job is to protect us, not to jeopardize our national security by pushing an agenda that legalizes illegals. Terrorists do a good job of gaming the system every time politicians weaken the laws.  Making laws about feelings is not the purpose of making laws!

So, I ask: Where is the urgency to stop this bill???

Sarah, the last time you called on us to contact our Senators we did. It made a huge difference!  Here we have a supposed majority in the house. We could win, but we have no leadership in the House. (Both mean well, but Michele Bachmann is too ineffective and Steve King only has 12,000 likes on his page.) We need someone who gets results by calling us, the troops, to action. It is my belief that it is better to be not to wait until the bill is passed to have twenty-twenty hind sight and complain about what happened after the fact.  Like I said at the beginning. I couldn’t care less about anyone’s career. I care about the country.

We can continue to push for Hillary, the White House and the Pentagon to be convicted over Benghazi (we need aggressive investigations), and we can continue to support Ted Cruz and others in defunding ObamaCare, but this particular issue can be stopped. Now. It is within our power to:

Seize the Opportunity. Act. And Make a Difference.

Darling Trey Gowdy has betrayed this country by pushing for a “humanitarian pathway to citizenship”, from I understand, to grease and line his fancy former-prosecuting pockets. I do believe that if enough pressure is applied, though, we can teach our Representatives the evils of this bill. We can make them see (with proof) that it is a communist-conceived agenda, and that all they are doing is helping to make that communist dream come true. I love the word communist.

Luis Gutierrez, former Marxist-Leninist of the Socialist Party in Puerto Rico, was enlisted by John Boehner to co-write the bill.  Paul Ryan is in charge of making sure Republicans vote for it.  Ryan makes no sense trying to justify the bill or his own actions. He wouldn’t even go on Mark Levin’s show after meeting with Gutierrez, even though the communist agitator and amnesty activist (I refuse to call Gutierrez a far left liberal) proudly displays photos of Ryan visiting Chicago on his wall. If Ryan wouldn’t talk to Mark Levin, why would we expect him or anyone else in DC to listen to our concerns? (Ryan eventually went on the show, but it shows the alienation and distance they have with their base).

I have tried to call attention to the matter on Twitter, Facebook, and my own wall, and there is interest, but the Zimmerman trial and the non-issue of race relations dominates the news. It is disappointing that our own network is intentionally not covering Immigration Reform. This results in Amnesty being inexistent, and I find the complacency unsettling! Let’s not wait until its too late.

Congress is in Recess August 2nd. That’s our chance. South Carolina, Virginia, Ohio are in particular states that can help overturn this bill, according to Steve King. Maybe we can stop some representatives on the target list from being tempted to sell us out. Maybe we can do Town Halls. Definitely we need to contact our Representatives not just via email, or voicemail, or even once! WE just need to show up and make some noise locally, often and like lobbyists who nag their own (nicely of course). But we can’t sit around and do nothing.

AMNESTY is not about our leaders, their corruption or even jobs, it’s about National Security and the preservation of a two-party system. Let’s not feel sorry for anyone. Let’s put this on top of our agenda and do something about it today!

Thank you, Sarah.  If you made this call to get us moving I would be grateful..

I am, faithfully yours,

P.S.  I love this picture of you. It shows you don’t let anyone invade your space. I would trust you not to lead by not letting anyone invade (or reward anyone for crossing) our borders illegally, and I’m a proud Hispanic. 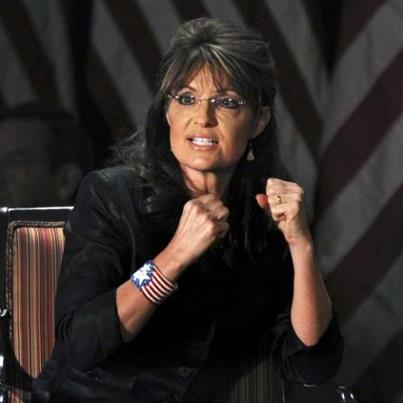 The Communist Party USA Infiltrates the GOP via Amnesty https://thespeechatimeforchoosing.wordpress.com/2013/07/09/the-communist-party-usa-has-infiltrated-the-gop-i-knew-it/