There is much more. Read it here.

This is incredibly troubling, and yet another sign that Chavez is looking to dominate the region, and is strengthening his ties with Islamic terror groups. Iran is a major sponsor of these groups, and as we reported in December, Chavez has allowed the Iranian government to place medium range, nuclear capable ballistic missiles, that have the ability to hit targets in the United States, in Venezuela.

This latest meeting is just another sign that Chavez is ramping up, and getting ready to do something.

Of course, this is nothing new, back in 2009 the Washington Times reported Hezzbollah had teamed up with the Mexican drug cartels. Radical Islamic paraphernalia has been found on our southern border in large amounts.

The Iran-backed Lebanese group has long been involved in narcotics and human trafficking in South America’s tri-border region of Paraguay, Argentina and Brazil. Increasingly, however, it is relying on Mexican narcotics syndicates that control access to transit routes into the U.S.

“They work together,” said Mr. Braun. “They rely on the same shadow facilitators. One way or another, they are all connected.

“They’ll leverage those relationships to their benefit, to smuggle contraband and humans into the U.S.; in fact, they already are [smuggling].”

His comments were confirmed by six U.S. officials, including law enforcement, defense and counterterrorism specialists. They spoke on the condition that they not be named because of the sensitivity of the topic.

While Hezbollah appears to view the U.S. primarily as a source of cash
– and there have been no confirmed Hezbollah attacks within the U.S. – the group’s growing ties with Mexican drug cartels are particularly worrisome at a time when a war against and among Mexican narco-traffickers has killed 7,000 people in the past year and is destabilizing Mexico along the U.S. border.

This is a dangerous situation and President Obama is asleep at the wheel, as usual. This should serve as a strong warning that we must secure our nation’s borders. This is a matter of national security.

It means we can no longer tolerate “open borders” advocates. Promoting the “open borders” agenda is dangerous. It also means the United States needs to get involved in the bloody war on our nation’s southern border, one that has been completely ignored by the Obama regime.

The Mexican drug cartels are slaughtering people daily, and the violence has spread across the border and into our country. These drug cartels use the same violent methods the Islamic terrorists use. Car bombings, beheadings, kidnappings, and random acts of violence to intimidate the Mexican citizens, are their stock-in-trade. It’s time to take this threat to the United States seriously.

Closing our borders and helping Mexico wipe these narco-terrorists out should be a top priority. By destroying the drug cartels, we’ll also destroy a major partner radical Islamists intend to use to attack the United States.

We also need to keep an eye on Hugo Chavez, and look at imposing sanctions and an embargo on the oppressive nation. We need real leadership here.

Iran Placing Medium-Range Missiles In Venezuela That Can Reach The U.S. 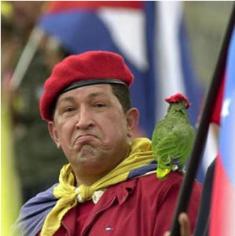 Anna Mahjar-Barducci with the Hudson Institute reports Iran is supplying Venezuela with medium-range missiles capable of reaching the United States:

Iran is planning to place medium-range missiles on Venezuelan soil, based on western information sources, according to an article in the German daily, Die Welt, of November 25, 2010. According to the article, an agreement between the two countries was signed during the last visit o Venezuelan President Hugo Chavez to Tehran on October19, 2010. The previously undisclosed contract provides for the establishment of a jointly operated military base in Venezuela, and the joint development of ground-to-ground missiles.

At a moment when NATO members found an agreement, in the recent Lisbon summit (19-20 November 2010), to develop a Missile Defense capability to protect NATO’s populations and territories in Europe against ballistic missile attacks from the East (namely, Iran), Iran’s counter-move consists in establishing a strategic base in the South American continent – in the United State’s soft underbelly.

According to Die Welt, Venezuela has agreed to allow Iran to establish a military base manned by Iranian missile officers, soldiers of the Iranian Revolutionary Guard and Venezuelan missile officers. In addition, Iran has given permission for the missiles to be used in case of an “emergency“. In return, the agreement states that Venezuela can use these facilities for “national needs” – radically increasing the threat to neighbors like Colombia. The German daily claims that according to the agreement, Iranian Shahab 3 (range 1300-1500 km), Scud-B (285-330 km) and Scud-C (300, 500 and 700 km) will be deployed in the proposed base. It says that Iran also pledged to help Venezuela in rocket technology expertise, including intensive training of officers

Venezuela has also become the country through which Iran intends to bypass UN sanctions. Following a new round of UN sanctions against the Islamic Republic, for example, Russia decided not to sell five battalions of S-300PMU-1 air defense systems to Iran. These weapons, along with a number of other weapons, were part of a deal, signed in 2007, worth $800 million. Now that these weapons cannot be delivered to Iran, Russia is looking for new customers; according to the Russian press agency Novosti, it found one: Venezuela.

The author goes on to say these missiles will be capable of carrying a nuclear payload. Continue reading this shocking report here.

Obviously this is very troubling. Hugo Chavez was just given powers by the Venezuelan Parliament to rule by presidential decree for 18 months. In other words, Chavez, a Communist, has been made a dictator. Anyone think he’ll surrender that power in 18 months?

While the U.S. Might not be in immediate danger, Venezuela’s neighbors, many of them our allies most certainly would be. The U.S. Is one of oil rich Venezuela’s biggest customers. Meaning we are helping fund the placement of these missiles that could be used to destroy our allies and cause serious destruction here.

One more reason we need to become 100% energy independent, but another discussion for another day.

The missile story is troublesome, but the fact Chavez [ a really unstable man] has now been made a dictator with absolute power to do anything he wishes, is the real story here. The backstory is different, and the histrionics not so dramatic, but we are possibly seeing history repeat itself. If folks remember March 23, 1933, and the implications of what happened on that date, they will understand the concern.

Chavez has already made attempts to destabilize the entire region, and has Communist allies in neighboring countries. With these new weapons, the conquest of our allies would be made much easier.

Of course, as we ponder what to do with Iran, we must remember that even though we are Venezuela’s biggest customer, when push comes to shove, Chavez will support Iran, and use his missiles as first strike weapons. His nuclear capable missiles.

This is as bad or worse than the situation Kennedy faced with the Cuban Missile Crisis. Frankly, it’s worse. When the Russians attempted to place nuclear missiles in Cuba, America was in grave danger, but ultimately the threat of the destruction of the Soviet Union by a nuclear strike from the U.S., was a sobering thought. In the end, the Russians wisely backed down.

Iran is a different animal. The theocracy is ruled by some who have no fear of dying in service to Islam, or even seeing their entire nation reduced to ashes if that’s what it takes. In fact there is a group led by Iran’s President Ahmadinejad who believe apocalyptic destruction would be a good thing. In fact, they believe it’s desirable, as it would pave the way for the Twelfth Imam’s appearance.

This is a situation the Obama regime needs to be all over. Sadly we are hearing nothing. Obama is no Jack Kennedy, and the United States is in big trouble. Once these missiles are in place, the time for talk will be over.

There will be few options at all.