BREAKING: President of Argentina Accuses Obama of Treason Against The United States 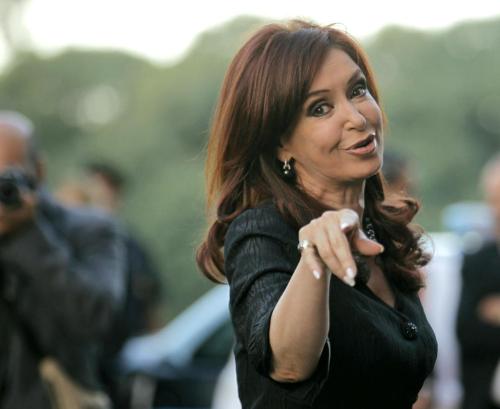 Speaking at the United Nations, Cristina Fernandez de Kirchener … the President of Argentina … dropped a bombshell that, if true, would make President Barack Obama guilty of High Treason against the United States, and mankind as a whole.

According to President de Kirchener, in 2010 Gary Samore … the White House Coordinator for Arms Control and Weapons of Mass Destruction, approached her, requesting her government send enriched uranium to Iran. Samore admits this, and says he also approached Russia and France asking the same of them! All three countries refused his request!

From the Marshall Report: [emphasis mine]

The President of Argentina – Cristina Fernandez de Kirchener announced before the United Nations that her nation had been approached by an Obama administration official, Gary Samore, former White House Coordinator for Arms Control and Weapons of Mass Destruction, requesting them to provide enriched nuclear fuel to the Islamic Republic of Iran in 2010. (Samore did not dispute this claim).

The request fell short when Kirchener asked for the deal in writing and Samore was never heard from again.

Samore did release a statement admitting that he made the request in 2010 and Argentina balked at the deal. He also admitted that he had approached France and Russia with a similar proposal. That deal fell through as well. The deal was supposedly to allow Iran to send their low enriched uranium to Russia to enrich further, then send it to France to finish converting it into nuclear reactor fuel then send it back to Iran for its own use. Supposedly in an effort to prevent Iran from weaponizing its uranium stockpiles. That deal also fell through.

These deals lead to a new U.N. resolution that increased economic sanctions on Iran. And eventually to the bargaining table for the horrible deal Obama has worked out with them this year.

Obama’s White House administration has not responded to these potentially treasonous allegations as of yet.

There’s only one real reason for Iran to have enriched uranium, and it has nothing to do with generating electricity!

Obama’s nuke deal with Iran is itself an act that borders on treason, but deliberately arming the world’s leading sponsor of terrorism [a regime that screams “Death to America” on a daily basis] with nuclear weapons, AND roughly $150 BILLION in cash, so they can purchase intercontinental ballistic missiles capable of hitting targets within the United States [which Obama’s treaty allows] is the most evil thing any American president has ever done.

This is the sort of thing that should make the America people all across the nation stand up and DEMAND Obama’s immediate resignation, as well as criminal proceedings to commence. Obama has proven over and over that he is an enemy of the United States, and Free people all around the world. Everything he has done for the past 7 years has been designed to destroy America and her allies, and strengthen her enemies.

We can’t wait for January 2017 and Obama’s exit from office. He can do too much damage between now and then. He has to go now and criminal investigations must begin immediately. The survival of the Free world demands this.

43 responses to “BREAKING: President of Argentina Accuses Obama of Treason Against The United States”