Now THIS is What I Call “Access Hollywood” ~ Sorry Extra ~ Mario Lopez IS A Lucky Guy!

Thank you for a great interview & a fun day in Alaska @SarahPalinUSA ! pic.twitter.com/1lNsgBnWmO

Penetrating the culture is such an important part of Sarah’s mission. Andrew Breitbart said it best: that the GOPe would have to transcend that to compete with her, and guess what? She is definitely doing it all. I still don’t know what  Mario Lopez did to deserve this but it sure is fun watching him enjoy his visit in Alaska.  Please RT the tweets below to start getting the media used to the culture changing.. and that we are a part of it this time.  Pop culture matters!

Big thanks to @SportsmanPR & @sportsmanchnl for showing me the great state of Alaska today! Look forward to coming back…

Quick stop for some halibut & drink before I take off @HumpysAleHouse http://t.co/MS2YeOe0l6

But Russia is only 30 miles from here! Actually used to own Alaska.. #LittleHistory

Btw..Didn't see Russia from her house 🙂

“@SarahHastings8: @MarioLopezExtra Just like Gaston in Beauty and the Beast. He uses antlers in all of his decorating." Exactly like that..

Going for a quick spin & then off roading with Todd Palin… http://t.co/2FzwhwJiHt

This is an 'Oosik' which is a walrus penis bone. Not kidding… I have so many questions. #Alaska http://t.co/cf6TASsmtp

Is this a cool backyard or what? #Alaska http://t.co/64pruopocI

Discussing hot topics with @SarahPalinUSA on her porch. What an amazing view… pic.twitter.com/NgYabjH6Mw

I found a moose. Kinda… This once belonged to a big ol' moose. These antlers are crazy heavy.. http://t.co/j1gFdyZSfd

In the kitchen with @SarahPalinUSA & her sweet momma. I ate moose casserole… Delicious pic.twitter.com/OAVa9KtISe 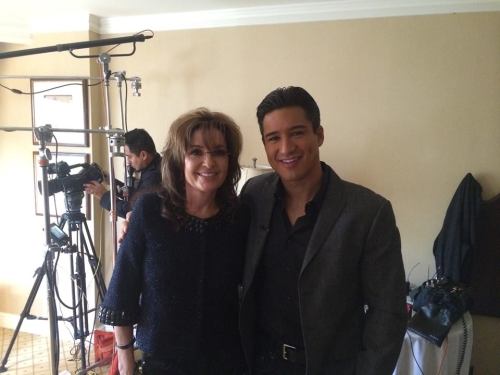 Cliff Sims of Yellowhammer News scored an excellent interview with Gov. Sarah Palin after her speech to the Baldwin County Republican Party in Orange Beach, Alabama.

Former Alaska Gov. Sarah Palin joins Yellowhammer News CEO Cliff Sims to discuss her new television show, “Amazing America;” where she sees herself fitting in to the conservative movement; the GOP’s chances to win back the senate; what she thinks about the rift between the “establishment” and the Tea Party, and more.  .

Brand New Video: FULL SPEECH (You don’t want to miss it, it’s really awesome!) Sarah Palin keynote at Baldwin County Republican Party Fundraiser in Orange Beach Alabama.  “I’m not afraid at to go on a Rino hunt!” ~ best.line.of.the.speech. (It was for me-what was yours?) 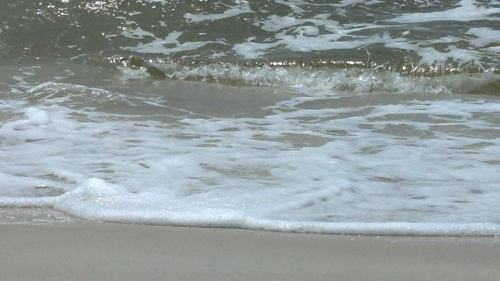 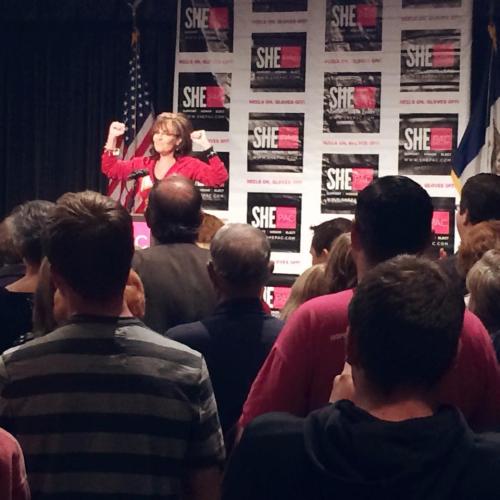 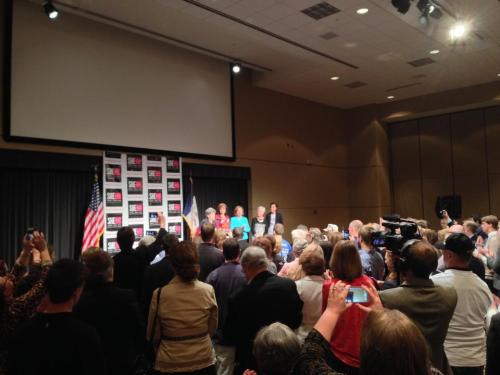 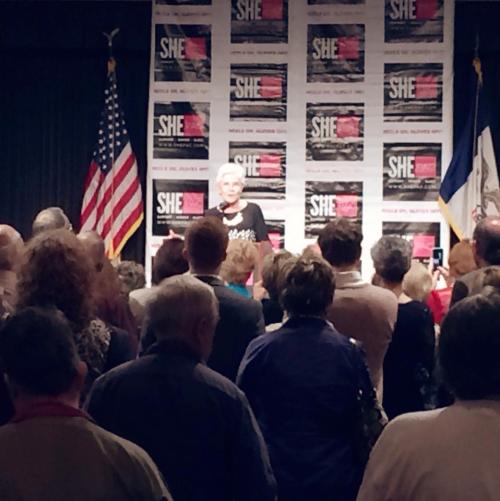 I will post updates later on should anyting come up. Thanks for viewing! I.M.

Palin sporting a Cyclone shirt during the SHEpac rally for @joniernst Given their sweet16 run I'll let it pass 🙂 pic.twitter.com/mbCt5vngsu 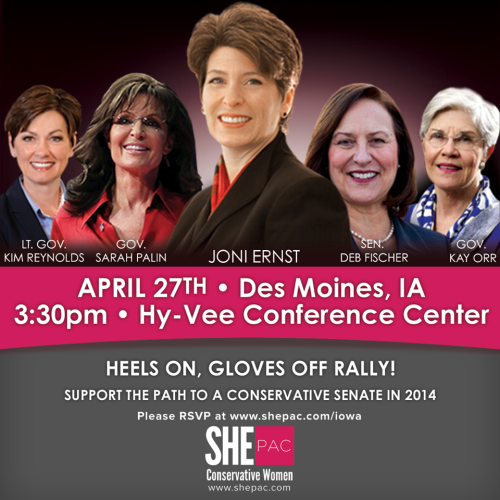 Before I get back into full campaign mode for the next post, I just want to let you, our readers, know that many have been asking me about Gary lately.

This is what I know:

You can find him on Twitter from time to time, but this is a perfect opportunity to peruse his articles since he started here. They are all still relevant and very informative. It’s about quality, not quantity. That is why he is in part such a great publisher, editor and writer. The other part is, Gary hates injustice and defends underdogs with all his heart and might. We’re about that, too: Justice! It is no wonder – he comes from a lineage of fighters dating all the way back to the Alamo!

Shhh… please don’t tell him I wrote this. He would hate for me to be bragging about him this way or making this much fuss because he is truly a generous patriot and humble warrior and everything will be fine and we want to respect his privacy; but if I don’t say it, maybe it won’t get done.. so if you get a chance, please lift him in your prayers for continued recovery.

Palin at NRA Stand and Fight: If I Were in Charge They Would Know Water-boarding is How We’d Baptize Terrorists

This is a grrrreat speech!

INDIANAPOLIS — Former Alaska Gov. Sarah Palin fired up a crowd of thousands inside Lucas Oil Stadium Saturday night to kick off the National Rifle Association’s “Stand and Fight Rally,” saying Americans’ constitutional rights as envisioned by the founding fathers are under attack and policies like gun-free zones constitute “stupid on steroids.”

“They knew that if the Second Amendment goes, the rest of the constitution is not far behind,” she said of the country’s founders.

“Just aim up in the air – that was his directive, his advice,” she

said. “Well, fine, Joe Squirt Gun, if your rapist is a bird.”

She also derided those who she said place an emphasis on political correctness in handling the country’s adversaries “instead of putting the fear of God in our enemies.”

She said later in her address that if “I were in charge” — a line that drew applause from the crowd — “they would know that water-boarding is how we’d baptize terrorists.” Read more

Having a great time at the NRA Stand and Fight Rally! It was great hearing Sara Evans; and the great, great… http://t.co/SGc4BqTKVC

Filed under In The News, NHRA, Politics, sarah palin 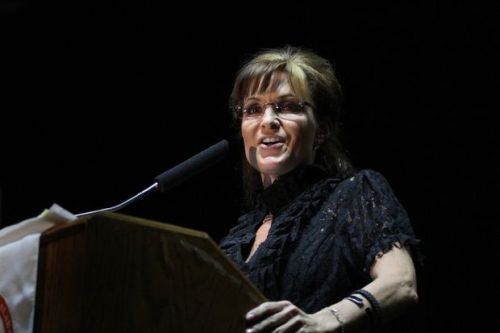 Governor Palin is the Voice and the Identity of Conservatives everywhere.

This is a follow-up from last night’s article!

Governor Palin descended on the Orange Beach Event Center with the grace of an eagle and the roar of a Grizzly!

Never one to mince words, she went straight to the heart of the matter regarding the state of our nation and the contributing incompetence of the people and leaders of our nation.  This would be President Obama and the cast of characters who are called leaders but more appropriately resemble clowns. 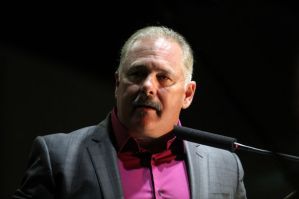 Orange Beach Mayor, Tony Kennon, was the first to speak. He made it a point of how having God in his family’s life and our nation was essential. He then said our country could use a Ruth or Debra today as he turned to face Governor Palin and said something to the effect that we may have ours.

Note: prior to having my picture taken with Governor Palin, Mary Cole, one of our members, said I should think about what to say and not wait till my turn for the picture. I was trying to think what I wanted to say. My mine was spinning trying to decide. So much I wanted to tell her. Suddenly it came to me. After the picture I thanked Governor Palin and said “Remember, God chose three women to do what no man could or would do.

She looked me straight in the eye and said “Right on”.

Coincidence?  I think not! 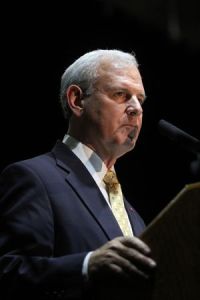 Next Senator Bradley Byrne came out to introduce Sarah. He said something that was music to our ears!

Senator Bradley Byrne said this about the foreign policy debacle in Crimea and the Ukraine. I don’t think Putin would be there with a VP Palin or better yet a President Palin. Wow, PRESIDENT PALIN!!

To my knowledge no other politician has acknowledged her leadership in this way. This was a direct comment that would confirm Governor Palin not only has the leadership qualities to be president, but has the tenacity to deal with and set forth a strong and formidable foreign policy.

Governor Palin referenced the fact of how President Bush was under constant attack from the media and democrats when gas prices went up but this administration has gotten a pass for higher gas prices.

And remember, these increases have been over $3.50 a gallon for about 5 years of Obama’s presidency.

Again, Sarah stressed several times that it is now or never to save our country. While saying this, Sarah’s eyes were piercing and focused. Her jaw was set like a warrior ready for battle. Her battle cry was “We must take back the Senate.” To me it was like telling her army no quarter, it is literally a life and death situation for our country!

To reiterate from last nights post, that means whether our conservative candidates win or lose their primaries, we must back our candidates in the general election!

Teamwork Period!! All focused on one goal, take back the Senate and maintain the House!!!

My fellow Palin supporters and all conservatives, keep this in mind:

If Governor Palin stresses this, even in her fight to unseat RINOS in the primaries, the very least we can do is trust her and follow her lead!

In closing there are three major things that really made me stand up and take notice!

1. Her reference as a Godly woman in the same category as a Ruth or Debra by the Mayor.

2. Her reference by a sitting Senator in regard as how a President Palin would not allow an enemy to walk over us without consequences.

3. Governor Palin is the first one to message how an ex president was viciously attacked on high gas prices while a sitting president gets a pass.

The night of adventure may be over, but the real journey now begins.

Ben Sasse for Nebraska Rally is over. 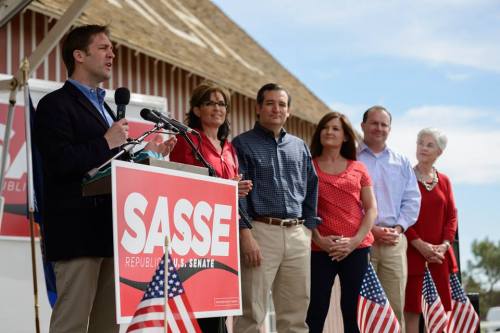 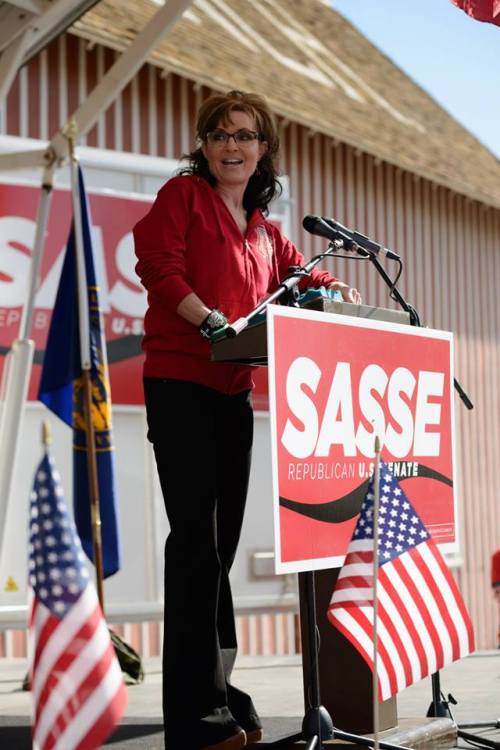 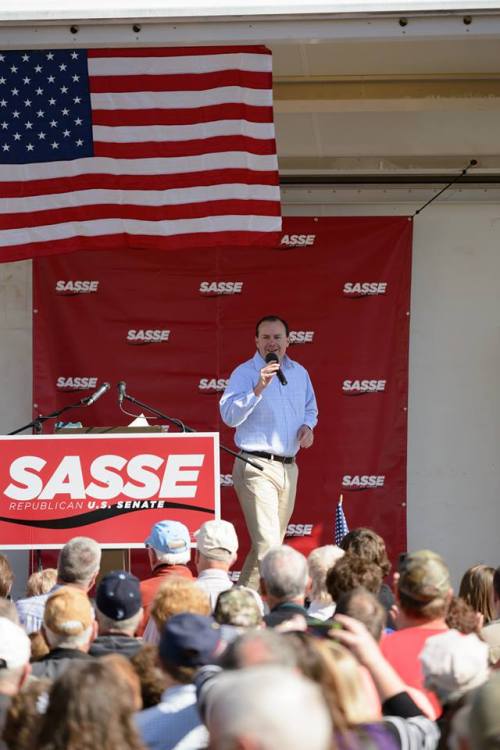 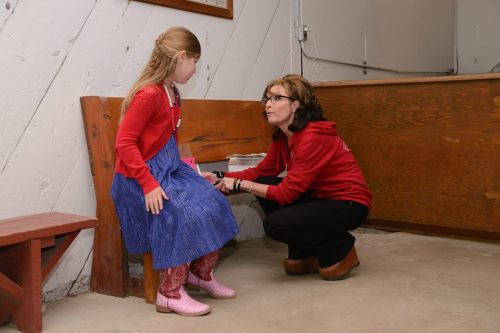 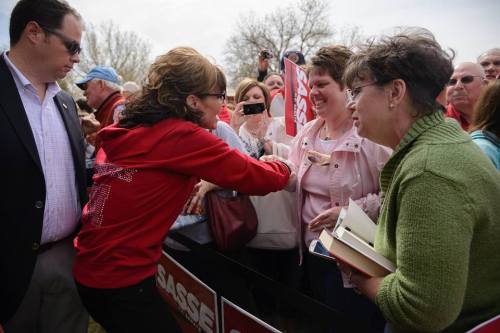 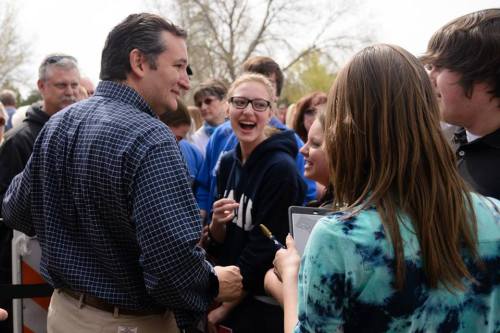 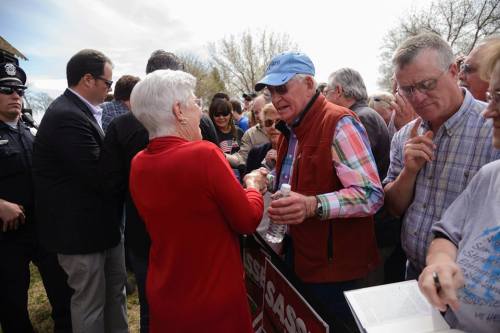 This gallery is by Brian Kelly | bkelly@al.com:  Former Alaska Gov Sarah Palin addresses several hundred people at The Conference Center at The Wharf in Orange Beach on Friday, April 25, 2014. 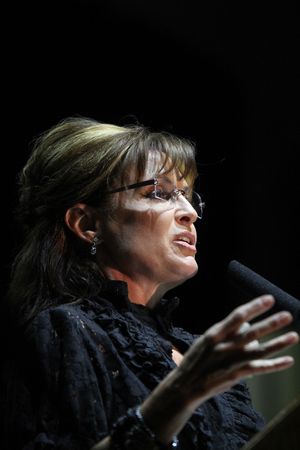 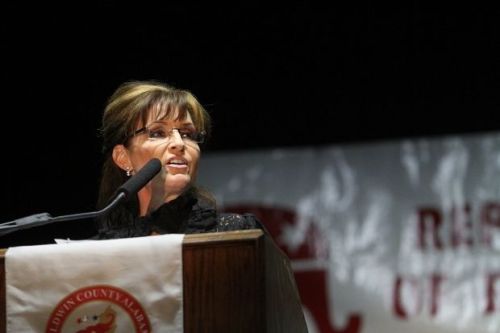 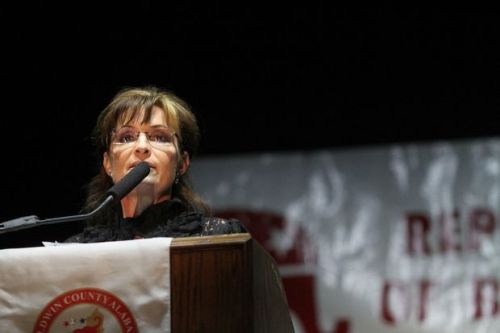 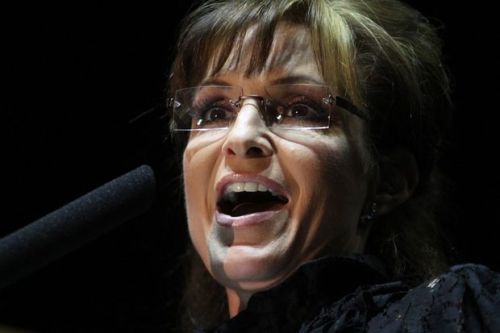 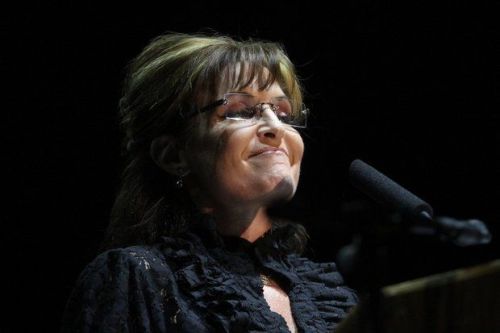 Okay I found one more.. couldn’t resist. Turns out it’s my favorite one!

Just one more.. so that makes the total 9. There’s never enough of Sarah!